Watching Curse of Mesopotamia it is easy to forget that this is only filmmaker Lauand Omar’s second production as director: this chiller is at times more unsettling and subtly disturbing than some films by people with many more years experience, let alone by someone still relatively new to big screen film production. 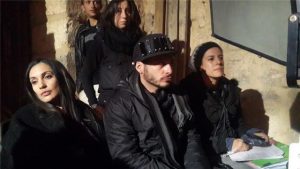 Five complete strangers are brought together in a remote part of the Middle East as part of an experiment.  The members of the group, though differing completely in character and personality, share one thing in common – their dreams are haunted by a ferocious and mystical demon.  The doctor (played by Stacy Thunes) who has invited the subjects to the desert retreat, hopes to discover just what it is that is terrorising their sleeping hours.  However neither she, nor her subjects, realise just what it is they have let themselves in for, as before long the ancient past reaches into the present day with devastating results.

Omar’s film works for a number of reason’s not least of which is one that many filmmakers involved in the horror genre – particularly those just starting out – seem to forget – namely subtlety.  Where so many go overboard with violent visuals, those who’s work makes a lasting impression believe in the less-is-more mantra – always more effective in the long run.  With Curse of Mesopotamia, Omar does this by eschewing overtly gory imagery – though there are intermittent flashes of intense and graphic violence, all the more alarming due to their sporadic and unexpected appearance.  Instead the most disturbing aspect of the film, and the one which stays in your mind long after it has finished, is its depiction of the breakdown of the various characters, as they are pushed to the edge both socially and mentally by forces outside of their control.  Bring together a group of disparate people in a confined area – including amongst others an ambiguous bi-sexual, a devout Muslim, a fame seeking wannabe and a central character with serious family conflicts, as well as an academic who’s main aim seems to be to light the blue-touch-paper and see what happens as she stands well back – and you are always going to have trouble.  That the said trouble stems from a supernatural source which all those present have in common, simply adds to the suspense as the action unfolds, and provides plenty of opportunity for character development on a level not often seen in your average horror movie. 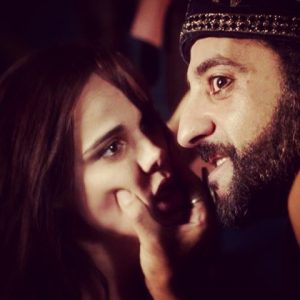 Fans of full in-your-ace horror however, will not be disappointed.  As mentioned, when the gore does put in an appearance, it leaves little to the imagination.  Plundering the authentic folklore of the countries where the action is set, Omar – who also wrote the story – creates a particularly gruesome method of murder thats over-the-top theatricality more than compensates for the film’s lack of visceral violence overall.

Brought alive on screen by an international cast – including actor Mauricio Rousselon, who’s portrayal of the tormented and confused central protagonist of John is moving and captivating in equal degrees – their varying talents and experience simply add depth to the complex and troubled characters they bring alive on screen.  By placing them within a story which crosses timespans between ancient and modern Iraq, and in which they face horrors both physical and mental, Omar has given those he gathered together to work on the production, the opportunity to explore the limits a person can be pushed to when faced with forces outside of their control.

Filmed on location in the Middle East, the authenticity of the settings – mainly that of the castle where the majority of the action plays out – brings a further dimension of reality as well as a sinister air to the story.  Add to this the knowledge that parts of the film were shot in a country where the presence of the terror group ISIS was an everyday threat, and you begin to realise how much those involved sacrificed for the production. 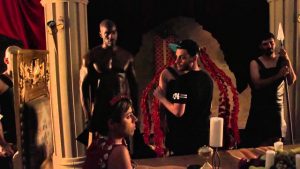 With an atmospheric blend of present day neurosis and ancient horrors, Omar has created an intriguing film, in the form of a disturbing and thought provoking modern day chiller which sits outside the generally accepted boundaries of contemporary horror.