A creepy new poster has been released for Still/Born which stars Christie Burke as a mother who fears for the life of her new-born child. Her fear stems from the death of her child’s twin sibling, leading her to believe that something supernatural is after her children. 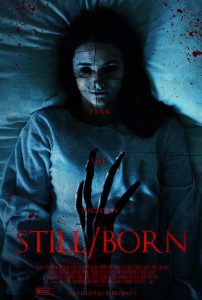 The new poster is pretty generic and, honestly, the film deserves more. Still/Born is an effective chiller that does well to blend internal fears of motherhood with overt physical fears from a supernatural presence. As well as featuring a fantastic performance from Burke, Still/Born is twisted and genuinely frightening in parts.

From director Brandon Christensen, Still/Born additionally stars Jesse Moss, Rebecca Olson, Sean Rogerson and Michael Ironside. The film will be released in cinemas and on VOD on 9th February 2017.