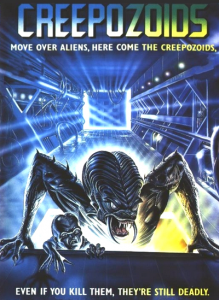 After the release of Alien in 1979, many studios tried to capitalise on the success of the franchise, adding more futuristic, science-fiction elements to their films. Creepozoids, released in 1987, was another of these ‘Alien-clones’, following a design and narrative structure that is painfully similar to Ridley Scott’s original. The film was criticised heavily for this upon release, and as such, was largely forgotten by all but the most fervent of cult movie fans. But Creepozoids was the first horror film I ever saw, and at seven-years-old, I was completely transfixed by the terrible special effects and bizarre, nonsensical storyline. I watched it again as a teenager, and having seen many more horror films by then, wrote it off as a fun but genuinely terrible movie, with wooden performances and a thin, half-baked script. But newly released on Blu-ray by 88 films, I thought now would be the perfect time to revisit Creepozoids, and find out once and for all if it was truly as horrendous as I remembered.

After the world’s superpowers have decimated the planet through nuclear warfare, a dishevelled group of survivors discover an abandoned government research facility. Keen to escape the deadly acid rain outside, they barricade themselves inside the unit, only to discover that the building was previously used to manufacture a sort of artificial soldier, a person capable of creating their own amino acids and thereby negating the need for food. Of course, these experiments swiftly got out of hand, leading to the creation of an enormous humanoid monster. With no way out, the survivors try to find a way to destroy the creature before it picks them off one by one.

Creepozoids is an exceptionally silly movie. Giant rats are thrown at the screaming actors from off screen; a shoulder injury enables one character to sense when it’s raining; and the humanoid monster is too rubbery to be frightening or convincing. In addition to this, the characters are uniformly two-dimensional, each one little more than a clichéd movie trope (the dumb jock, the nerd, the sexy blonde etc.) Since the characters have no real personality, the dialogue is consistently flat and functional, and the actors are clearly phoning in their performances. Even Linnea Quigley can’t keep us engaged for the entire movie, and the whole thing is only a little over an hour. 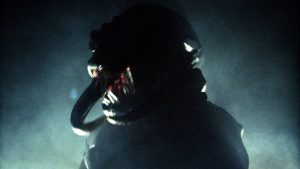 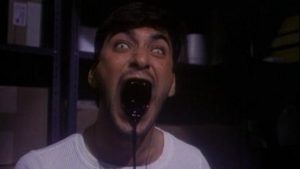 But there are still a few interesting ideas on display in Creepozoids, particularly when it stops trying to emulate existing movies. After the humanoid has finally been killed, its head cracks open and a monstrous baby crawls out from its skull. As Jake (Richard L. Hawkins) recovers from the fight, the baby attacks him, forcing him to strangle it to death with its own umbilical cord. Not only is this an unexpectedly nasty denouement to the film, it also adds an interesting symbolic element to the movie’s overarching theme – namely that the nuclear war has destroyed things for the future, and that the children will be made to suffer due to the actions of the previous generations.

It should also be noted that Creepozoids looks fantastic on Blu-ray. 88 Films have done a superb job with this release, and the quality here is lightyears ahead of previous DVD releases. The transfer is clear and sharp – impressive for a film that is so consistently dark – and the sound is crisp throughout, highlighting Guy Moon’s deliciously synth-heavy score. 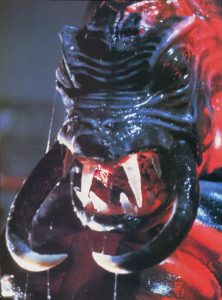 There may not be anything particularly artful or interesting about Creepozoids, but the film is not nearly as bad as I remember (thanks in large part to the quality of the Blu-ray release). There are some genuinely creepy moments – like the first mutation scene at the dinner table – and the final sequence is startlingly original for a film that started life is an Alien parody. Creepozoids may not be a classic example of atmospheric filmmaking, but for those who like their horror films trashy, irreverent and fun, the 88 Films release is an absolute must-have.