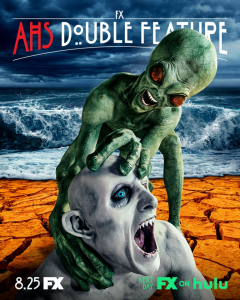 American Horror Story: Double Feature will be split into two parts, with part one, “Red Tide,” being set by the sea and part two, “Death Valley,” being set by the sand. And by the looks of the new poster, that means we can expect both sea creatures and aliens to make an appearance!