Crazy Trailer for Attack of the Killer Donuts is Crazy

A super crazy trailer has been released for Attack of the Killer Donuts and it looks like a mad dream. As you’d expect, it’s filled with bonkers b-movie effects and a general air of stupidity that looks contagiously entertaining. Imagine something on the lines of Dead Sushi or Return of the Killer Tomatoes and you’ll know exactly what I mean. 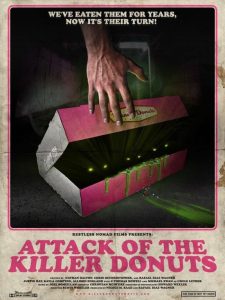 A chemical accident in a sleepy town turns ordinary donuts into bloodthirsty monsters. Unaware of the donuts’ danger, Johnny, Michelle and Howard sell them to unsuspecting customers. When the donuts start eating their victims, the only way the three friends can save their sleepy town is to track down the Killer Donuts down and destroy them. The final standoff is where it all began: Dandy Donuts.

Attack of the Killer Donuts comes from director Scott Wheeler, who’s worked on the practical effects behind films like Poseidon Rex, Avalanche Sharks – where he was also the director – and Planet of the Sharks, so it’s clear to see where he got the bizarre and hilarious idea for this film from.

Check out the trailer below and decide if the horror-comedy Attack of the Killer Donuts is the dish for you. You can catch the film from 17th November courtesy of Level 3 Entertainment.