The Count Takes on the Nazis in Dracula Vs Hitler

Hollywood screenwriter Patrick Sheane Duncan has put his writing talents towards penning his first novel, and it’s got one hell of a concept behind it.

Pitting one of horror’s most recognisable monsters against History’s biggest (human) monster, Dracula Vs Hitler is a reworking of sorts of Bram Stoker’s classic gothic novel, and I for one can’t wait to have a read. Check out the following synopsis:
At the beginning of World War II, Professor Van Helsing and his fierce daughter Lucy have united with guerrilla forces in Transylvania to defeat Adolf Hitler and his army. But the valiant team is no match against Nazi brutality. Only someone sadistic and relentless can match the depredations of the Gestapo. And luckily, Van Helsing happens to know just the guy. 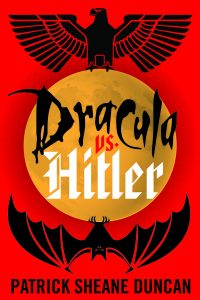 Prince Vlad Dracula, the onetime ruler of Transylvania, might be an insatiable vampire, but he’s a patriot above all else. When Van Helsing revives the legendary Count Dracula from his tomb, the professor unleashes a killing machine upon their mutual enemies. Dracula is more than willing to drive out his country’s invaders, especially if the task includes all the German blood he desires. But when Hitler, who yearns to be immortal, hears that Dracula lives, he heads to Transylvania for the ultimate battle. Can history’s deadliest villain be defeated by the world’s most monstrous legend?

Duncan is known for scripting such films as 1995’s real-time Johnny Depp-starrer Nick of Time, and 1996 action drama Courage Under Fire. You can sink your teeth into his debut novel when it appears on shelves later this year.