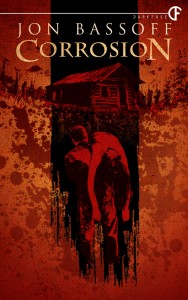 Corrosion is the masterfully written debut by Jon Bassoff, it reminded me of both No Country for Old Men and Sin City, an illegitimate love child if you like, but a hell of a lot darker and dirtier.

Written in first person from three perspectives the author mixes tough narrative with disturbing thought and it’s a runaway success. Like Cormac McCarthy’s No Country for Old Men there are no quotes around the spoken work but it’s distinctively clear what’s going on and it works really well. First person when done right can be a thrilling reading experience, being inside the mind of a character brings a certain intimacy and conversely, done wrong can kill the interest very quickly. The question is can you stand being in the slightly disturbed minds portrayed in this book, it’s well worth finding out.

The first character we meet is Joseph Downs an Iraq war veteran, horrifically burnt by an IED, his car breaks down just outside a small Colorado town and he’s stuck there for the foreseeable future. While in a bar he violently intervenes in an argument between a woman and her husband and pretty soon she’s knocking on his hotel room door, playing Joseph like a cat plays with a mouse and when she hands him a gun, things get plenty serious. Being in the mind of Joseph Downs bought back memories of Marv from Sin City, he is a dark, absorbing and completely consuming character. His thoughts always return back to his ultimate destination, a place known as the Mountain and he resists its lure until he can no longer stay away.

The second character we meet is Benton Faulk, sometime in the past, a 16 year old boy with a mother on her deathbed and a crazy father desperately trying to save her. It’s fascinating to be with this boy as his balance of rational thought slowly wastes away. The third character is the masked Reverend Wells, a preacher who takes a hard-line view on the sinful and it’s gripping as we see how these characters are linked together.

What’s with Joseph Downs? An undoubtedly brutal past and the desire to get back to the mountain, what extremity is Benton Faulk heading for? And the Reverend, another one with secrets, what’s his story? Highly recommended, the plot is enthralling, the first person narrative puts you right there in the story with these flawed characters as the story gradually unfolds and leaves you desperate to know it all.