Finally, we can get our first glimpse of Timo Rose’s remake of Ted V. Mikels’ cult 1971 schlockfest The Corpse Grinders, in the genuinely brutal international trailer.

German director Rose (who revived the cult gore series Violent Shit in 2010) brings a new spin on Mikels’ tale, which told of a struggling cat food company whose sales pick up after a murdered employee is disposed of in the meat grinder. Developing a taste for human flesh, the town’s felines begin attacking their owners in search of their next meal.

“I don’t want to see cats killing people,” said Rose earlier this year. “It’s time to retell the whole story from the beginning. It is a reboot, and it is something different and very new. It’s a modern version of bone-crushing terror, bloody and scary.” 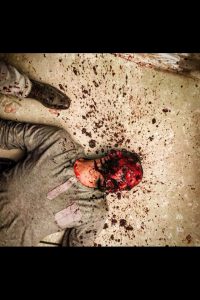 Rose’s film stars Anthony Straeger, Max Evans and Enya Maria Tames, who also appears in this year’s remake of Herschell Gordon Lewis’ gore classic Blood Feast. Mikels himself also makes an appearance; you can see him (and his trademark moustache) at the beginning of the trailer.

Here’s the official synopsis for the remake:
Landau, the young owner of Lotus Cat Food, is struggling to keep the company alive as business is worse than expected. Landau is broke and down on his luck and can no longer afford to pay his employees. Because of this, he starts to kill one of his employees every couple of days. Gradually, more people disappear until the police become involved in the case.

One of the missing persons, Frank, has an overprotective girlfriend, Tessie, who sets out in search for him. Tessie follows the leads all the way back to Lotus Cat Food and its sinister truths.

Unfortunately, legendary cult director Mikels will never get to see the film released, having sadly passed away last month.