Consumption Trailer will Eat your Soul 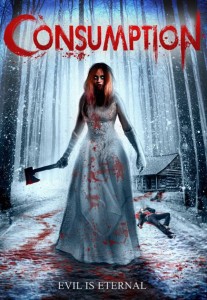 Finally seeing a home release is indie horror Consumption, which first screened at the United Film Festival in the States way back in September 2014. Originally titled Live-In Fear, the film is the feature directorial debut of Brandon Scullion, who shot the ‘Found’ segment of upcoming anthology 60 Seconds to Die.

Consumption’s synopsis reads:
A group of friends travel to the snowy Utah mountains for a weekend retreat. One brings with him a dark secret that could destroy their lives forever. As they prepare to face an ancient secret buried in the woods outside their winter resort, an unstoppable evil begins to grow, consuming them one by one.

Consumption will be released on US DVD and Digital HD on July 26th, through WildEye, who have kindly put out this new trailer and poster.