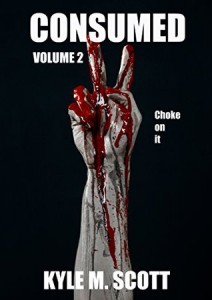 Kyle M. Scott is another name I have seen around a lot but never read. It wasn’t until this anthology was sent to me that I realised I already have another title featuring him on my Kindle. The nature of an ever growing to be read pile is that, sometimes, you never know who you have and who you don’t have.

After discovering the other title and who else was involved in it, I had a little bit more interest in this one. You know what it’s like when you read someone new. A little bit of trepidation when you step into the unknown realms of reading someone you are not familiar with, and know not what to expect.

As I always say though, a short story collection is a great way to pick up a feel for the way someone writes.

STRIPPERS
Synopsis:
Kris and Lee are currently sitting enjoying a mixture of drugs and drink. It seems to be their entertainment of choice. Lee suggests going to a strip club but Kris is not really interested, until Lee reiterates the tickets are for a one off show with beautiful women never to be seen again. Plus, the genius who supplied the first class weed they were smoking also supplied the tickets.

Kris agrees to go and they set off for the once in a lifetime show. It could turn out to be the end of their lifetime.

This is horrific. What a way to open a collection. If ever you wanted a horror story with blood and literal guts, then this is it.

I like Mr Scott’s writing style a lot. Blunt and almost blasé, he doesn’t mince around with his words. Straight to the point and graphic. Sometimes a little too graphic for my liking but good all the same.

Looking forward to the rest of this collection now.

ROOM 7
Synopsis:
Edward Slater owns a hotel. He prides himself on accepting all manner of guests, from Senators to virtual street bums. When Curt and Sheila arrive demanding sleep after a long journey, Edward takes them under his wing and promises them a night of exquisite sleeping pleasure in his best room. Room 7.

They should have kept driving.

And again this is totally not what I was expecting in this story. This all started as a nice story about an attentive, if a bit eccentric, host, doing his best to make sure his guests feel like kings and queens when they check in. All to be twisted on its head in both the most bizarre and brutal ways imaginable.

I am slowly starting to realise that I should expect nothing but the bloodiest of words to literally flow across the page from Mr Scott.

He has a definite knack for taking the most unassuming people and turning them into absolute monsters.

MR MOUSTACHE
Synopsis:
Butch is a man’s man. Butch by name, butch by nature. Lisa is his girlfriend and soon to be mother of his child. A boy. Their relationship is not ideal and Butch isn’t exactly the nicest of people. Especially where Lisa is concerned. He likes Freddy Mercury. He has a moustache just like his.

He has no time for Lisa and even less when she whinges about the baby kicking like it is now. It kicks good. He wonders if his steroids have anything to do with that? He’ll soon find out.

This is horrific but very funny at the same time. I think this was written more tongue in cheek than anything but it really works.

Kyle Scott has a way of making you like his characters even when they are vile. Butch is horrible but I couldn’t help but laugh at him and feel sorry for him in the end.

Again brutal and gory, but funny into the bargain.

PARTY CRASHER
Synopsis:
Max and Mary are having a birthday party for their son, Paul. Paul can have anything he wants for his birthday. His dad is a billionaire. He doesn’t want this clown though. He’s not very good.

Max and Mary don’t think the clown is much good either. They think he’s drunk.

Everyone should be scared of clowns.

These stories are getting better and better. This one was brilliant. A mixture of a horror with a bit of Arnie thrown in.

The build-up of tension in this one is superb. It is horrific as well as tense so has you reading with one eye closed, holding your breath, before you throw up.

DEDICATION
Synopsis:
Andy has taken on a job working the door at a night club. He doesn’t like it and neither is he cut out for it but he needs the cash.

His first night on the job, he has to work with his boss Gemmel. A hulk of a man with undying dedication to his job.  Even in the face of untold adversity.

Another one that went in a totally different direction than I ever would have thought. This, again is an exercise in how to build tension and have you crapping your pants.

When you read this collection you will utter “I didn’t see that coming” more than once.

Dedication is good. Everyone should have it. There are exceptions though.

WHEN ALL THE LIGHTS GO OUT
Synopsis:
Lennon’s boss has just committed suicide. Lennon is considering it himself. After all, the lights have gone out and the world has ended. Or has it?

He just has to take care of the others first.

In terms of short stories to finish an anthology or collection, Kyle M. Scott can just drop that mic and walk off the stage in the cockiest of ways staring everyone in the eyes while challenging them to beat that one.

This story is up there in my top five list… ever.

It is dark and depressive and horrific but told in such a simple way that it triples its effectiveness. Nothing is over described. Nothing is gratuitous. It is all just perfection for the type of tale it is. This is sublime.

Nothing else to say. This story is superb.

So there you have it. Another short story collection but my first experience of Kyle M. Scott. Going by this little beauty it will not be my last either.

The horror is of many types. In your face, body bits flying everywhere, horror. Slow build up while you can hear the horror coming, horror. You know it’s coming, but just not from where, horror. And in When The Lights Go Out, you have horror of the most supreme form that will stay with you for a long long time. I have read that story three times today. It is wonderful.

To summarise: It’s horror shorts that you need to read. Just buy it. Seriously.