Concept Art for Friday The 13th: The Game Pays Homage to Part VII 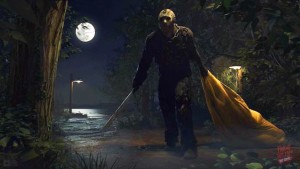 If you’re familiar with the kills in Friday the 13th: Part VII then you are going to appreciate the concept art we have to show you (right). Paying homage to one of Jason’s infamous kills, the art teases the sleeping bag kill, which could be considered one of Jason’s best. Personally, I enjoy people being thrown through windows.

The attention to detail in this game is pretty phenomenal; with Kane Hodder providing the mo-cap for the game and reprising his role as Jason this looks like it’s going to be far superior to the game from 1989. It’s been a long time coming, but we’re going to get the Friday the 13th game we deserve, finally!

The game managed to raise an astonishing $823,704.20 on Kickstarter last year and has, so far, raised over $57, 000 through Slasher Backer. It’s clear that the fans are devoted to pushing this game forward and ensuring that they get the best gameplay they can. 3 new playable versions of Jason have already been added and there is set to be a poll, via Lady Democracy, that will allow fans to choose which 3 they want to see.

Friday the 13th: The Game should be with us this October.