February’s unsettling trailer and the two mysterious posters that followed have given little away concerning Trey Edward Shults’ enticing It Comes at Night. Even the official synopsis (below) wasn’t really all that helpful. Thanks to EW however, we now have some plot details as well as a couple of new stills.

A man (Joel Edgerton) learns that the evil stalking his family home may be only a prelude to horrors that come from within. Secure within a desolate home as an unnatural threat terrorizes the world, the tenuous domestic order he has established with his wife and son is put to the ultimate test with the arrival of a desperate young family seeking refuge. Despite the best intentions of both families, paranoia and mistrust boil over as the horrors outside creep ever-closer, awakening something hidden and monstrous within him as he learns that the protection of his family comes at the cost of his soul. 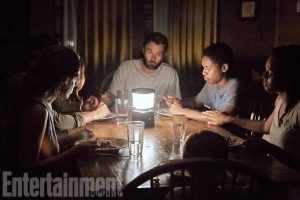 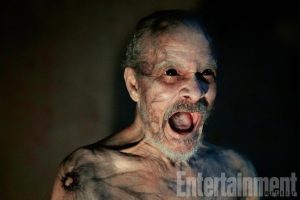 The outside threat, EW revealed, is “a civilization-destroying pandemic,” as opposed to any singular entity. “When an intruder arrives, pleading for help, they are forced to choose between kindness and potential infection,” the site explained, adding: “And this is one killer sickness.”

The film’s makeup artist Jessie Eden told EW that reference points for how the virus would manifest were drawn from real life illnesses such as the Bubonic plague and the Ebola virus.

A24 (The Witch, Green Room) will release It Comes At Night in the US on August 25th.