A few days ago it was reported that monster movie Colossal had been sold to an unidentified Chinese company following its premiere at the Toronto International Film Festival. Well, it turns out that this was something of a falsehood, with the actual buyers of the Anne Hathaway-starrer having now been revealed.

THR reported on Thursday that the film was actually picked up by a new company formed by Radius co-founder Tom Quinn and Alamo Drafthouse owner Tim League. What remains true is that the new owners are planning an ambitious and significant 2017 release for the film, which also stars Dan Stevens (The Guest), comedy regular Jason Sudeikis (Horrible Bosses, 30 Rock), Tim Blake Nelson (Holes, The Incredible Hulk) and Austin Stowell (Whiplash).

Colossal is directed by Nacho Vigalondo (pictured filming Timecrimes), who helmed 2014’s underrated Open Windows, as well as segments of V/H/S Viral (Parallel Monsters) and The ABCs of Death (A is for Apocalypse). 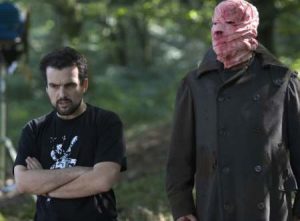 Gloria (Hathaway) is an ordinary woman who, after losing her job and being kicked out of her apartment by her boyfriend, is forced to leave her life in New York and move back to her hometown. When news reports surface that a giant creature is destroying Seoul, South Korea, Gloria gradually comes to the realisation that she is somehow connected to this far-off phenomenon. As events begin to spin out of control, Gloria must determine why her seemingly insignificant existence has such a colossal effect on the fate of the world.