Screenwriter Colin Trevorrow has taken to Twitter to give us the first look at Jurassic World: Fallen Kingdom and shows us Chris Pratt’s Owen Grady and a cute baby raptor. He captioned the video “From our Jurassic family to yours.”
Check out the first raptor-ific tease here. 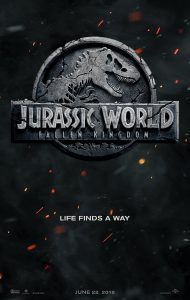 Synopsis:
With all of the wonder, adventure and thrills synonymous with one of the most popular and successful franchises in cinema history, this all-new motion-picture event sees the return of favourite characters and dinosaurs—along with new breeds more awe-inspiring and terrifying than ever before.

J. A. Bayona (A Monster Calls) is in the director’s chair for Fallen Kingdom and he has a lot of work to do if he’s to beat Jurassic World’s massive $1.67 billion at the worldwide box office.