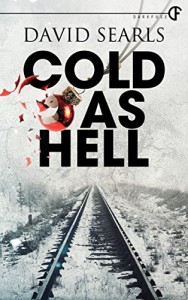 I Approached Cold as Hell by David Searl’s with a little trepidation mainly because it’s my second Christmas horror story of the year and its not even May. Plus the first one was rubbish so hopefully this would bring horror back to the festive period of April.Peter and Ava are Christmas shopping with their seven year old twins when an electric train ride comes past, of course the kids want in and the adults won’t fit in the carriages so Peter has to wait with Uncle Buster for the twenty minute ride to end while Ava shops till she drops.

The temperatures biting, it’s as cold as Hell, the Browns are up against the Colts and he has a small investment on the outcome. So the availability of toasty heat and several wall-mounted flat-screens beckon him from the inside of the bar behind them. There’s time for a beer and five minutes of the game, of course there is.

6:42 is the time, he repeatedly checks, trying to work out when they should get back, Buster is outside in the cold waiting, testicles like ice cubes most probably and the Browns are losing. He finishes his beer, times still 6:42 and this day is getting weirder. Outside Buster’s gone, no kids and the first slither of panic creeps into his mind.

Cold as Hell prays on every parent’s worst nightmare, losing your kids and then as if unsatisfied with the ensuing panic. David Searl’s torments the lines of reality, questions your sanity and then waits patiently as the pieces of the puzzle slot into place. A short read at just shy of 60 pages but very well written, completely gripping and I look forward to reading more from this author.