Synopsis:
Two sisters vie for the affections of a man who may or may not be a vampire. 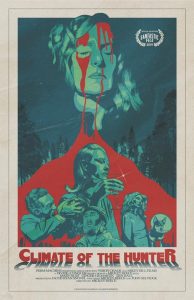 Climate of the Hunter feels like a much older movie, and not just because of its retro wardrobe. The lush visual style, copious lens flares, and frequently arch line delivery imbue it with the air of classic 1970s horror cinema—particularly the vampire flicks coming out of Europe in that period—without it ever feeling derivative. That cosy familiarity should draw casual viewers in, though many may be left scratching their heads at some of director and co-writer Mickey Reece’s more out-there artistic choices.

The story and characters are very simple. Elizabeth (Mary Buss) works too hard and is a little uptight, while her sister Alma (Ginger Gilmartin) is a lethargic stoner who has secretly sold her condo in the city and retreated to the seclusion of their cabin in the woods full time. Both want to seduce Wesley (Ben Hall), a silver-tongued Lothario and author who is visiting his family’s own vacation cabin nearby. The sisters’ catty attempts to push the other out the way take a turn when Alma starts to suspect that Wesley might be a blood-thirsty predator.

Reece does a great job sowing the seeds of doubt from the get-go. An early scene traps us in the sisters’ uncomfortable domestic drama as the camera moves slowly back and forth across the dinner table, leaving us wondering if Wesley truly enjoys their company or has ulterior motives. The arrival of his son Percy (Sheridan McMichael) results in a series of chilly exchanges that could easily be interpreted as conversations about Wesley’s vampirism—but are they? By the time the film hits its surreal and chilling peak, complete with some wonderfully indulgent nods to iconic vampire movies, the audience is well aware that what we’re seeing could all be in Alma’s mind—or perhaps she’s the sanest one there. 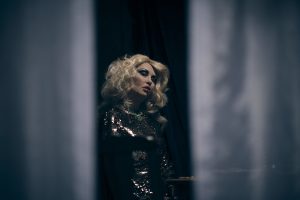 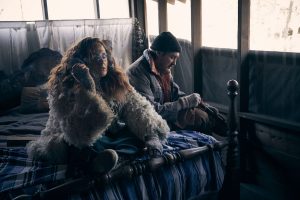 While all the actors know exactly what they’re doing, Gilmartin steals the show as Alma, injecting a surprising amount of pathos into the film. Despite getting saddled with some of the script’s more verbose and obscure dialogue, Hall is also fantastic, delivering a performance that is both suave and dangerous, making it easy to see why the sisters fell for Wesley—and why Alma would begin to distrust him, whether or not her suspicions about him were correct.

More accessible than much of Reece’s filmography, though still plenty weird, Climate of the Hunter drips in atmosphere and intrigue, all while providing a few good chills and chuckles along the way. It’s certainly style over substance, but it’s also more charming than most films you’ll see this year.