Classic Horror of the Month: Hellraiser (1987) 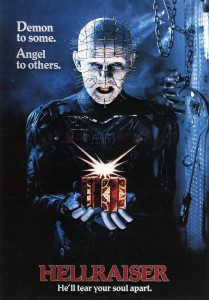 “What is your pleasure, sir?”

It’s hard to describe just how exciting Hellraiser was at the time of its release. On a mid-eighties landscape dominated by bland horror comedies and Jason/Freddy sequels, Clive Barker’s debut feature felt like something completely fresh and new – seeing it for the first time in 1987 was surely akin to listening to the Sex Pistols or the Damned in 1976.

After seeing his screenplays Underworld (1985) and Rawhead Rex (1986) made into crap films by never-heard-from-again director George Pavlou, Barker decided that if he wanted his 1986 novella The Hellbound Heart brought to life properly he’d have to do it himself, despite his inexperience in film direction. Already quite the literary phenomenon, thanks to his Books of Blood collections and first novel The Damnation Game, his low budget debut would become an instant cult classic and play a huge part in cementing the Master Fabulist’s status as a giant on the horror and fantasy landscape.

In essence, Hellraiser is a story about a love triangle. Rampant sexual adventurer Frank Cotton (Sean Chapman) gets more than he bargained for when he manages to track down the fabled Lament Configuration. Solving this puzzle box summons up the Cenobites, ‘angels to some, demons to others’, who exist to show the select few the true meanings of pain and pleasure for all eternity in their nightmarish S&M realm.

Shortly after this, Frank’s brother Larry (Andrew Robinson) moves into the former family home that was the site of Frank’s bloody exit, along with second wife Julia (Clare Higgins). Flashbacks reveal that Julia briefly enjoyed a particularly torrid affair with Frank not long after marrying his brother, and when a splash of Larry’s blood on the attic floorboards resurrects an incomplete version of Frank, a besotted Julia is soon out looking for victims for Frank to drain of blood and regenerate his body. Into this bloody mess walks Larry’s daughter from his fist marriage, Kirsty (Ashley Laurence), who soon discovers along with our two Hellbound lovers that the Cenobites don’t give up on their lost playthings so easily… 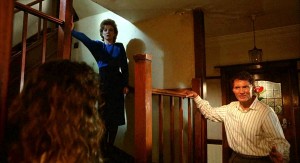 Mostly taking place in one house, Hellraiser is simple, brutal and effective; a masterclass in creating groundbreaking work on a low budget, just as The Texas Chainsaw Massacre was thirteen years earlier. It’s the startlingly original imagery that marks it out from its contemporaries, along with a sexual intelligence of a kind rarely glimpsed in the horror genre. This ain’t Goosebumps, that’s for sure. Barker’s hellish creations, inspired by the punk movement and his own visits to S&M clubs, were at that time surely the most wonderfully depraved ever to grace the big screen.

That said, the Cenobites don’t actually enjoy a terrific amount of screen time in their inaugural escapade. A good thing, too, it keeps them mysterious and their appearances have that much more electrifying an impact. Much of the most memorable imagery, along with the most compelling aspect of the narrative, comes from the resurrected Frank hiding skinless in the grotty attic, waiting for visits from his obedient love slave. There’s something undeniably primal and unsettling about the sight of a skinned man, especially when he’s wearing a suit and smoking a cigarette. 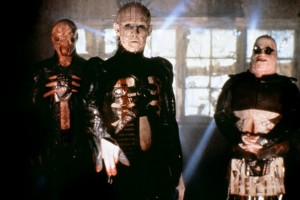 However, it was the face of Doug Bradley as ‘Lead Cenobite’, soon to become known around the world as ‘Pinhead’, that glared out from those cinema posters and video rental boxes. Who wouldn’t double-take at the arresting image of a man with nails driven into every square inch of his head?

While newcomer Ashley Laurence is fine in her role, it’s the performances from Robinson and Higgins that form the main constituents of the glue holding all this together. Robinson, best known aside from this for his portrayal of the psychotic ‘Scorpio’ in Dirty Harry (1971), is great in both a sympathetic role as Larry, expertly working in just enough ‘wet blanket’ quirks to help understand why Julia yearns for Frank so much, and later in complete bastard mode as Frank himself, after said scoundrel has stooped so low as to murder his own brother and steal his skin. Higgins similarly handles her transition from unsatisfied wife to depraved evil queen magnificently. Supporting these performances is the lush and majestic score from Christopher Young, another major force in elevating the narrative beyond the bounds of its meagre budget

While all this could lead one to believe that film is perfect, the fact of the matter is that Hellraiser is a ‘rough diamond’ in a number of respects. On the American money-men’s insistence, most of the British actors in the film (including Chapman, making his performance difficult to assess) were overdubbed by US actors, turning an obviously English setting into an unconvincing American one. The result is that it doesn’t feel like it’s set anywhere. 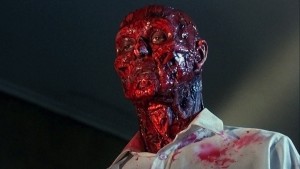 We also get some decidedly ropey animation/light FX. The budget had run dry by this stage, so Barker and a friend reportedly spent a long drunken weekend drawing these onto each cell by hand. Similarly, the climactic winged demon that flies away with the box is on the shoddy side; little wonder, seeing as FX man Bob Keen only had seven hundred quid to play with. However, all of these things do nothing to dampen the film’s ingenuity, and ultimately just add to its unique identity like a cute mole on the face of your lover.

Despite the American dub and unsure setting, it all still feels undeniably British in some respects. It’s tempting to think of it as the spiritual cousin of sensationalist 70s films by the likes of Pete Walker and Norman J. Warren, only infused with new intelligence and energy. The startling gore ‘fetishism’ on display traces a direct lineage from the likes of Argento and, in particular, Lucio Fulci.

The huge success of Hellraiser saw to it that Pinhead became in perpetuity a prominent member of the legion of Famous Monsters, standing proudly side by side with Dracula, Frankenstein’s monster, Leatherface, the Creature from the Black Lagoon, and the rest of them. Inevitably, success means sequels, and the years since have seen a veritable slew of them, from number 5 onwards being 100% DTV dreck, grafting our Lead Cenobite onto already written and completely unrelated scenarios. Woe betide the unwary viewer who picks up one of these in error, believing it to be somehow ‘Hellraiser’. The latest of these, Hellraiser: Revelations (2011) was even knocked off on the ultra-cheap, with a different actor in the role, simply so that Dimension Films wouldn’t forfeit their rights to the character. 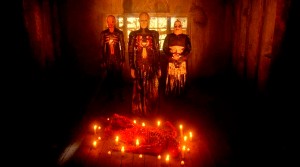 These apocryphal entries may have dragged Barker’s child through the mud somewhat, but they’ve at least kept Pinhead’s malefic visage out there in the world (and Doug Bradley in work). The cycle can be seen to have come full circle last year when the author reclaimed his creation for one fabulous last hurrah with recent bestseller The Scarlet Gospels. But clearly Pinhead and his box will still return to the screen before long, whether it be in the long-mooted big screen remake/reboot of the original or just another disposable small screen ‘sequel’.

A slightly tarnished ‘brand’ by now, for sure, but there’s still absolutely no denying that Barker’s film is among the very best, and certainly most original, horror movies of the 1980s and one of the best British horror movies of all time. Dodgy dubbing, light FX and all.