Duncan P Bradshaw. A name I have seen a lot of but never picked up anything he has written before. He very kindly asked if I would like to review a copy of his new book, Class Four (coming soon). I decided to give it a go and then discovered Class Three was loosely connected so decided to give it a go first. I have mentioned before that zombie books never really did anything for me. They really need to have something different before they truly hold my attention and make me want to read more. Class Three had that something different in abundance.

Synopsis:
Jim has just been dumped by his longstanding girlfriend. What does he do to recover the situation? He goes and gets very very drunk. He has to call on his brother Phil to pick him up and pour him home safely. As they return to Jim’s house they notice something weird in the sky but they don’t think it’s the end of the world.

Jim struggles to wake up the next morning and is greeted by a text from Phil stating: “It’s the end of the world!!!!” and it truly is.

Something has broken up on re-entry into the earth’s atmosphere and people are dying left, right and centre. The problem is they don’t stay dead.

Jim and Phil now have to put “the plan” into operation. A plan that they allegedly came up with when they were kids in the event of a zombie apocalypse. Problem is Jim can’t remember it.

What follows is 24 hours in the company of Jim and Phil as they battle the undead, general nutcases and a weird cult intent on serving their “god”. All this while trying to find the girlfriend that has just dumped Jim in the hope she is still alive and he can get her back.

Right where do I start with this one? As I said previously I have discovered a new found love of zombie books, if they have something different. After agreeing to review this one I discovered it had a comedy element to it. Straight away my alarm bells go off. I like a certain amount of wit and humour in my books (the darker the better) but a comedy zombie book? Hmmm. Now I have finished it? This, ladies and gentlemen, is a classic. This is a book that all people who read horror stories need to have on their shelves. Horror. Yes. Comedy. Yes. Does it mix well? Absolutely yes.

Our main characters in this are obviously Jim and Phil. As you know Jim has just been dumped. He’s still hungover when it all kicks off. Phil is single. Phil is nuts. He has an obsession with all things “end of the world” and “zombies”. A perfect companion to have in a situation such as this? As it turns out, yes he is indeed. He is also, quite possibly, one of the funniest characters I have ever read in a book. Phil and Jim work so fantastically well together. They bounce off each other and compliment each other so very well. Jim is a bit more serious. He is certainly more serene. Phil on the other hand is permanently one hundred miles an hour. Constantly thinking and plotting and constantly coming off with some of the funniest one liners I’ve read in years. You would honestly think that Mr Bradshaw had drafted in a comedian to write some of his stuff. He couldn’t be that funny himself. Right? For two main characters in a story you just could not get any better.

We have a mixture of other characters throughout the story that, again, find their position and work it masterfully. I don’t want to give away too many of them but a few would be: the “reverend”, the leader of the cult. This man is just off his rocker. Where he came from and where he got his ideals is anyone’s guess but he finds some other nutters to follow him. Some of the zombies we follow are also fantastic. You follow their thoughts and their travels as they try to assuage their constant hunger. You really get inside their psyche and get to follow the supposedly “evil” side of things. Jim and Phil meet up with, and sometimes gang up with, a few others on their travels and they all totally gel together to make up one unlikely band of heroes.

Plot wise? Well what can you really do with a zombie story? I mean it’s the end of the world. Zombies eat people and people who aren’t zombies run away, very fast, to try and survive. The difference with this zombie story is the mix of comedy and horror and what I would term “real life” scenarios. Think Shaun of the Dead but more serious and more realistic.

I have always looked at zombie stories and films as deadly serious. Constant horror and constant running and constant blood. What people tend to forget when they watch or read these things is that people are people. People will laugh and joke about things even in the midst of the absolute horror shown in Class Three. That is the beauty of this book. It seems so very realistic. When the characters laugh you think, yeah I might have said something like that or yeah I would have laughed at that. When the characters come up with something serious you think, yeah I would have done it that way. There is none of this over fantastical Hollywood mega blockbuster type explosions and car chases. It feels like real life with real people dealing with a situation in the best way they can. We all know that humour would be a big part of it if we were involved in it ourselves.

Don’t get me wrong though. This is a horror book. The opening chapter gives you a vision in your mind that is so atmospheric and horrific that it will give you goose bumps. It genuinely chilled me to the bone. There are other scenes throughout this book that are absolutely horrific and very harrowing. One scene in particular (that I will try not to spoil for you) involves a rampage of zombies coming across a group of people stuck in a traffic jam that have no idea what is going on. One particular group get targeted in this scene. As you read it you will be screaming. You will be punching cushions and you will quite possibly have a tear in your eye, as I did. 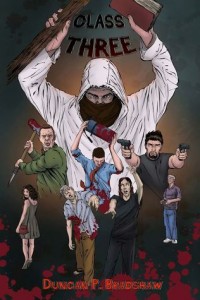 This book is wonderful. The writing is superb. Free flowing and perfectly paced throughout, it will keep you routed to your seat, wherever you may be because you will not want to stop reading. I genuinely missed my stop on the bus trying to squeeze another little bit out of it.

Duncan Bradshaw has a fantastic writing style. He gets you engrossed in the characters from the very outset. His mix of comedy and horror and real life are superb. Dare I say a bit like Jeff Strand? When you read Class Three, you will end up believing the zombie apocalypse is possible. You best be like Phil and Jim and have a plan.

To summarise: An apocalyptic horror story with as close as you will ever get to real life characters in a story. A perfect blend of humour and horror. You will be scared, you will laugh a lot and you will be close to tears. If you want to continue your love of all things zombies or indeed try it out for the first time, then pick this up. You will not regret it.