THE CITY OF MIRRORS: Book Review

Synopsis:
In the aftermath of an apocalyptic viral infection which wiped out most of the population of earth, a scattering of survivors in North America are hopeful that the infection is over and they can start to rebuild. But the man known as Zero, the first infected, still waits in the ruins of New York City, unwilling to let humanity have the last word.

It’s been a long, long wait for the third and final instalment in Justin Cronin’s Passage Trilogy. Since the release of the staggeringly brilliant The Passage in 2010 and its enjoyable sequel The Twelve in 2012, fans of the series have been biding their time, thirsty for more – a situation some of the principle characters in The City of Mirrors are very familiar with. So was it worth the wait?

Having left the previous books in the series on my shelf for a few years, and too eager upon the release of the third to go back to them before I devoured it, I found myself struggling at first to reacquaint myself with Cronin’s large cast of characters and their complicated web of relationships, before settling in again as if amongst old friends. Newcomers to the series, however, will be utterly baffled if they start here, because the series spans not just years but millennia in its exploration of humanity’s struggle with the threat of extinction, and there is a lot of ground to cover before entering The City of Mirrors.

The Passage detailed the start of the outbreak which wiped out most of humanity, beginning with an ill-fated scientific expedition to Bolivia in the hopes of curing death (what could possibly go wrong?). A scientist called Fanning became infected with a terrible virus which, while prolonging his life exponentially, turned him into a mutated vampire-like creature thirsty for blood. Hoping to refine the virus to create super-soldiers, the government brought in twelve death row inmates as test subjects (again, what could possibly go wrong?). This included Anthony Carter, an innocent man awaiting lethal injection in Texas who took the offer believing he had nothing left to lose. Finally, in a desperate attempt to rectify his mistake, the head scientist Jonas Lear experimented on a six year-old girl, Amy, the Girl from Nowhere, successfully introducing the virus into her system without the negative side effects. But with Fanning (now known as Zero) whispering in their heads, Lear’s former test subjects got loose and made short work of the North American continent, slaying millions while turning one in every ten into one of their own. Nearly a century later, mankind has been decimated, with its few survivors living in walled colonies with high-powered lights to keep the ‘virals’ at bay at night. The immortal Amy comes across one such settlement and joins forces with a small group of its soldiers (the Expeditionary) to hunt down and kill the original Twelve, in the hopes of reclaiming the earth.

The City of Mirrors picks up where the previous book left off, with eleven of the Twelve eliminated, only the docile Anthony Carter and the daddy himself, the dreaded Zero, remaining. Amy has vanished, and is assumed dead. After many years without a viral sighting, the survivors of mankind are growing restless living behind walls and want to move out, but a few older members of their community are wary. One in particular, Michael, has isolated himself and is working on a mysterious project involving a ship. Another, Lish, has gone looking for Fanning for the final boss battle. And Fanning is waiting for her. He has been waiting a very long time.

It’s difficult to say how much I enjoyed The City of Mirrors without letting my enjoyment of the previous novels cloud my judgement. The Passage in particular is a stunning piece of fiction, as chilling as it is utterly heart-breaking and poignant. Maintaining that dramatic and emotional momentum to the end of the series was a tall order, and I’m not entirely convinced that Cronin succeeded.

On the one hand, The City of Mirrors is a somewhat anticlimactic end to the trilogy, more than a little bloated in places, and prone to hammering home certain obvious points about love to a degree which begins to feel sophomoric. On the other hand, it successfully juggles a plethora of different character arcs and tonal shifts, at one moment heart-warming to a fault, the next achingly sad, gradually introducing a feeling of creeping unease which crescendos in a horrifying massacre. The reader is nudged into the nerve-wracking position of fearing that characters we’ve followed for three novels (from their childhoods into old age in many cases) may die at any moment – and some do. When it delivers, it really delivers. But there are points at which it feels as if the novel is treading water, and a more brutal editor might have honed the text down to a leaner and more satisfying read overall.

That being said, it’s never dull. Despite the sheer volume of characters, the core cast are fully fleshed out and interesting, and it’s wonderful to follow them again after all this time as they come together and break apart, love and lose, live and die. The novel also explores in depth the mysterious villain Fanning, in a lengthy section which I can see some people hating, but which I thoroughly enjoyed. Told by the character himself, the sudden transition into first-person narrative is initially jarring, but the elevated prose of the segment which drips in literary and biblical allusions reminded me of Frankenstein’s monster relating his life story at the heart of Mary Shelley’s classic novel, in all its pathos and occasional mad ranting. Like a lot of the book (and particularly the ending), Fanning’s narrative goes on slightly too long and treads the line of becoming self-indulgent on the author’s part, but mostly it’s an enjoyable interlude to the apocalypse all around it. 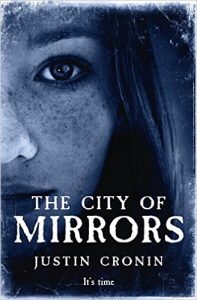 The City of Mirrors is a novel about earth-shattering grief and powerful love, and it mostly works on both fronts. Sweet and sad, creepy and thrilling, it’s an interesting take on the vampire mythos, and fans of the series will eat it up. Sure, some questions are never answered, and yes, it can be sappy and clichéd, and I’m sure that my nostalgia for the first book made me read it through rose-tinted glasses. But Cronin has a knack for making you care about his characters, and I was truly sad to part ways with them when the novel finally succeeded in drawing itself to its milked-for-all-it-was-worth close. With a film adaptation supposedly in development, we may see more of Amy and Fanning and the Twelve. For now though, as the soldiers of the Expeditionary would say, it’s time to ‘take the trip’, and say goodbye.