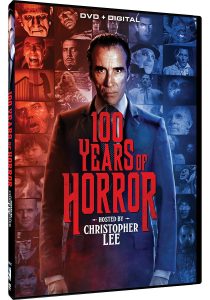 The Christopher Lee-hosted 100 Years of Horror will be available to own when it is released on DVD and Digital on 6th February 2018. It’s a shame it’s not released before Christmas, because this would definitely have made my list to Santa Claus. I guess it will now make the perfect gift to brighten those New Year blues.

The epic 26-episode series originally aired in 1996 and chronicled some of the most important and popular horror films from the last 100 years. Episodes were dedicated to mummies, zombies, braniacs, man-made monsters and more, so it’s an essential purchase for any horror-loving film fan.