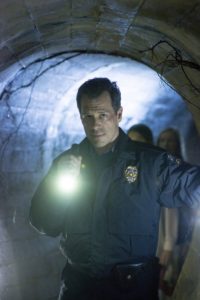 Commenting on what it was that convinced him that Stephen King’s original story had all the trappings for a TV show story arc, Danish writer/director Christian Torpe said, “At its heart, “The Mist” is a story about what people will do when they are blinded by fear – the mist is a wonderful metaphor for that. It is also, unfortunately, an incredibly timely story to tell. I’ve had a lot of personal experiences with fear. It’s something I’ve struggled with in my life and have tried to make sense of. To me, it felt like there was a story where I actually had something personal to offer and contribute.”

Having seen the pilot episode myself, it’s instantly apparent just how faithful Torpe wants to remain to King’s source material – and to some extent Darabont’s 2007 movie adaptation – but what really left me frantically hankering for more was just how many disparate, well-rounded characters, parallel pivotal premises and simmering tensions he’s managed to pack in to just the first 45 minutes. It’s that addictive!

Eager to find out where the hotly anticipated show will take audiences when it airs on Spike this June 22nd, SCREAM’s Howard Gorman caught up with Torpe to discuss laying down the giant gauntlet of adapting such highly praised and regarded source material as this…

SCREAM: Although you come from more of a comedy and drama background, the Weinstein Company specifically came to you to ask whether you thought the source material had the makings of a TV series.

Christian Torpe: I think Bob (Weinstein) had read a script that I had done that was slightly darker than the shows that I had been doing back in Denmark and I think he saw a darkness in that that he responded well to. So we sat down and had a talk about it and I told him that I absolutely love and adore Stephen King but that I’m not a traditional horror writer. I hadn’t done anything like that before so I told him that he would have to be open for the show to be perhaps more of a psychological drama with added elements of horror when it was appropriate for the story. But he was completely on board with that and we got to work on it.

SCREAM: So first you were concerned that maybe Bob Weinstein might have been expecting something more horrific than you had ever done before but audience expectations must have surely been another major concern.

Yes! When you’re adapting something, you always want to be respectful of the source material. And we’re talking about Stephen King here who is just one of the best writers around. I did actually have a long exchange with Mr. King where I proposed to him the changes I had in mind and he was just incredibly kind and generous and gave me the go ahead. He basically just said, “As long as you don’t do anything ordinary, then you have my blessing to just fire away.” I also think it helped me that there was already a very strong movie adaptation, which I think is brilliant. Knowing that the fans have one faithful adaptation, notwithstanding the ending, I think that it freed me to feel that I could stay true to the DNA of the story but give my own spin on it.

SCREAM: Although King’s story was published back in 1980, it’s astounding just how timely it is right now, especially at a time when society is so divided.

That’s exactly why I agreed to take this project on because it’s an incredibly unfortunate, but incredibly relevant story. If you look at the world today, everyone is angry; everyone is afraid; people are looking for someone to lead them to The Promised Land; people listen to whoever provides the loudest answer and not perhaps the most correct answer. And that’s what people do when they are afraid or in a state of panic and I wanted to examine that feeling.

The book deals with how people see answers within religion when they are blinded by fear or confronted by things that they can’t understand. That was the underlying metaphor in the book and I wanted to keep that, but I also wanted to expand on it and see how other characters found answers in other things such as in ideology or in misogyny or in personal realisation. I wanted to take the original idea of religious fundamentalism and expand on that fundamentalism into various areas of contemporary life. 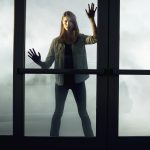 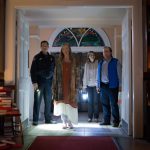 SCREAM: Commenting on the show, you mentioned that you have struggled with fear in your life and have tried to make sense of it and you consequently felt that “The Mist” was a story for which you had something personal to offer and contribute. Is your adaptation as semi-autobiographical as that statement would lead people to believe?

It definitely has elements of me in it but I think we all struggle with various irrational fears that, for whatever reason, we just can’t shake. I find it incredibly helpful to talk about those fears and get it out in the open because otherwise it’s just inside of you and it eats away at you and it starts controlling your life in a very unhealthy way. I certainly drew from my own experiences. I haven’t been in a mist like that (laughs), but the underlying psychology was definitely something I could relate to.

SCREAM: Based on the first episode, Alyssa Sutherland’s character is a particularly progressive teacher in the show – something the locals aren’t too happy about. I felt that this served as a great jumping off point in terms of highlighting how the community prefers to turn a blind eye to the horrors that are actually out there in the real world and to wrap their kids up in cotton wool rather than prepare them for what’s to come.

I have written extensively about education before so this was something I really enjoy discussing, especially when it comes to the sexual politics of how teenagers are discussing sex. To a large extent, I think it’s an unhealthy culture that is denying kids information instead of just addressing it head on and preparing them for adult life so that was a subtext that I personally really wanted to explore in the show.

SCREAM: Without going into spoiler territory, one of the key plot devices revolves around a sexual abuse case. That’s some very difficult terrain to tackle and I imagine those scenes were some of the most challenging to write.

We were definitely very conscious about how we had to go about tackling those scenes. Every time you see a story about sexual abuse on television, it’s really a story about the detective investigating the case and it’s never usually about the victim. We wanted the story to be about the victim and about her feeling of loss of control and alienation from herself and from her family. We thought that this was a story that was rarely being told on TV.

SCREAM: Obviously, “The Mist” is essentially all about the characters and the simmering tensions between them but we’ve seen some gnarly moments in the trailers. How gruesome will it ultimately be?

It’s a Stephen King book so it obviously needs to deliver on horror as well as the characters. But it is surprisingly character-driven and it’s not a scare every three minutes show, but I think that horror only becomes horror if you’ve done the character groundwork beforehand and that’s what I hope people will respond to when they see the pilot.

As I said, if the pilot is anything to go by, I’m confident the show is going to be an immense hit with old fans and new when it debuts on Thursday, June 22nd, at 10pm ET/PT. In the meanwhile, we’ll leave you with the latest trailer…