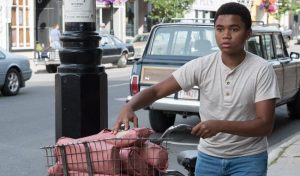 Chosen Jacobs was part of the talented ensemble cast who portrayed The Losers Club in 2017’s IT, directed by Andy Muschietti; he played Mike Hanlon, the African American member of the otherwise lily-white posse. While he’ll be back for a smaller role in 2019’s IT: Chapter Two, Hanlon will be all grown-up and played by adulty actor Isaiah Mustafa. Here’s what Jacobs told ComicBook.com about meeting Mustafa in set and his feelings on how he’ll expand of the role.

“We met the older cast, and they did such a phenomenal job with casting for each role. Seeing everyone in person, it’s so accurate. Especially for me. I felt like Isaiah is the perfect match for Older Mike Hanlon. It was an awesome thing, and we collaborated. He asked me questions on, ‘Okay, how do you think about this?’ and ‘How do you think Mike would play this?’ And I just sat down, gave him my embodiment of it.

“I trust him as an actor to make his own decisions as Mike Hanlon, but then just giving him how I viewed Mike, and just giving him little pointers of how I think Mike would act. With his skill level as an actor, he’ll run with that. I have total faith in all of our older versions to just kill the roles. But meeting him in person did give me a lot of peace and solace that the film was in good hands.

“It’s kind of a funny story. He actually told me this when we first met. He said his last name is ‘Mustafa,’ right? And Mustafa means ‘chosen’ in … I don’t know what the language was, but that was kind of a crazy thing.”

IT: Chapter Two arrives in US Theatres on September 6th, 2019. Since it’ll be a while until we have a trailer or an official synopsis, you can revisit the trailer and synopsis for 2017’s IT below. We’ll keep our ears to the ground in order to bring you all IT: Chapter Two news as details emerge. Stay tuned!

Synopsis:
Seven young outcasts in Derry, Maine, are about to face their worst nightmare — an ancient, shape-shifting evil that emerges from the sewer every 27 years to prey on the town’s children. Banding together over the course of one horrifying summer, the friends must overcome their own personal fears to battle the murderous, bloodthirsty clown known as Pennywise.