Since its inception, The Chilling Adventures of Sabrina has been one of my favourite horror comics in recent years. Taking characters that were light and fluffy and making them both dark and disturbing was an inspired choice, and the comic’s depiction of powerful women was refreshing in its simplicity. Issue #6, however, is a rare misstep for the series, lacking the creative flair so often displayed in Roberto Aguirre-Sacasa’s work. Though Robert Hack’s illustrations are beautiful throughout, this is a comic that feels entirely unnecessary, undermining some of the subversive elements of the previous five issues. 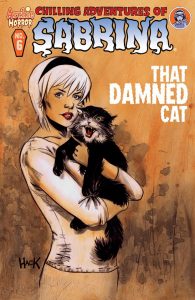 Taking place between two arcs, ‘The Crucible’ and ‘Witch Wars’, Issue #6 of Sabrina is a standalone comic, exploring the back story of Salem, Sabrina’s feline familiar. Initially I was excited to read more about Salem, but from the very first page, Issue #6 is nothing more than a retelling of stories that we’ve all heard before. The first half of the comic is occupied with the history of Nag and Nagaina, Ambrose’s pet cobras. Immediately we get a lacklustre retelling of Macbeth, with the pair murdering a royal guest and framing the guards by smearing them with blood. Although the story has a couple of nice flourishes, the chapter ends with a reference to Rudyard Kipling – a reference that seems to add nothing to the story. In the commentary at the back, Aguirre-Sacasa talks about his love for Neil Gaiman’s ‘Sandman.’ I appreciate the intention, but Gaiman’s one-shot stories – even those that referenced Shakespeare – were always intelligently done. Here it feels like a gimmick.

The same can be said for the second half of the comic, which deals with Salem’s transformation scene. In this story, Aguirre-Sacasa takes inspiration from Dave Egger’s recent film ‘The Witch’ – though this is putting it somewhat mildly. The design of the art, from the house to the woods, is lifted directly from the movie, going so far as to include a black goat that rears on its hind legs, and witches levitating at the climax. This may sound innocuous, but it’s hard to deny the similarities, especially when Aguirre-Sacasa references the film in his commentary at the back of the book. 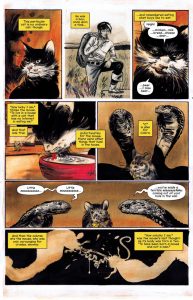 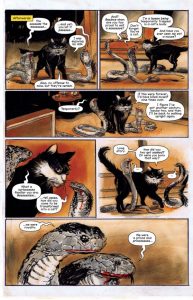 Sabrina #6 isn’t entirely without merit, but after a run of five brilliantly inventive issues, this one feels lazy by comparison. Being a one-off story, Issue #6 wouldn’t dissuade me from picking up Issue #7 next month, but from a series that I’ve come to expect a lot from, Issue #6 seems to have an utter lack of magic.