The Houses October Built 2 is set for release On Demand and Digital HD this Friday 22nd September and to remind us that the film is on the way, we have an interesting map infographic that showcases America’s scariest haunted houses. 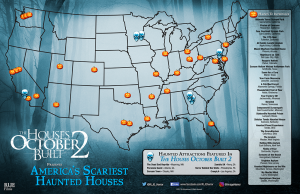 The infographic includes the Haunted Plant Experience in Ohio, The Asylm in West Virginia and Nightmare on 13th in Utah. How many have you visited?

Many of the map’s attractions feature in the film, so if you want a closer look at them, you’ll have to get your hands on a copy. As with the first film, the second showcases real life haunted houses and Halloween attractions, as well as their actors. It really is a blast and well worth checking out if you were a fan of the first film.

Check out our review of The Houses October Built 2 here and be sure to grab a copy of the film this Friday 22nd September.