Actor William “Bill” Moseley is a respected actor and musician. He is most known by horror fans thanks to his iconic performances as Chop-Top in The Texas Chainsaw Massacre 2 and more recently as the terrifying Otis B. Driftwood in Rob Zombie’s House of 1000 Corpses and the 2005 sequel The Devil’s Rejects.

Jon Dickinson had the opportunity to sit down with the man himself recently to discuss his most iconic horror performances, what he loves most about the genre and what the horror legend has been up to recently.

SCREAM: Your recent project Charlie’s Farm has recently been released on DVD here in the UK, what can you tell me more about your role in the film?

Bill Moseley: In Chris Sun’s Aussie slasheroo Charlie’s Farm, I play John Wilson, the psychotic father of monstrous Charlie (no wonder he’s so messed up!). My wife, Merideth (played by the awesome Trudi Ross), and I like to accommodate the various hitchhikers & backpackers that frequent our isolated outback farm. In exchange for their willing labor, we put ‘em up, give ‘em three squares a day etc. etc. But eventually, when they get to lookin’ more and more like big cheeseburgers, we beat ‘em down & cook ‘em up! 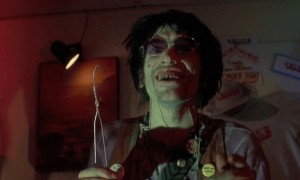 You played Chop Top in The Texas Chainsaw Massacre 2. What are your thoughts about the popularity of Chop Top?

I love Chop-Top, always have, always will. I’m so glad that the far-out horror fans agree! At the horror conventions I attend, I never grow tired of shouting out Chop-Top’s greatest lines (“Dog will hunt!” “Git that bitch!” and of course “Lick my plate, you dog dick!”) The original Texas Chainsaw Massacre scared the crap out of me; did for quite awhile until I joined the family as Chop-Top back in spring 1986. Since then it’s been a Sawyer love affair (“The Saw is Family!”). I only wish there was such a thing as character emancipation in the movie business. I’d buy Chop-Top his freedom and make a movie all about the plated one. GoFundMe, anyone?

What was your favourite Chop-Top moment?

My favourite Chop-Top moment wasn’t on screen. I was taking a break on the set one hot afternoon in Austin, Texas, when I spied a well-dressed woman with a little boy looking over at me. The kid was scared, and his mother marched him right up to me and said, “Look, Johnny, there’s nothing to be afraid of. It’s just an actor in a costume.” I leaned down very slowly and whispered in Johnny’s ear, “Don’t believe it.”  Talk about the stuff of nightmares. I wonder if he still remembers it to this day.

What was it like to work with Tobe Hooper?

I loved working with Tobe Hooper, really credit the man with this fabulous career. Tobe took a chance on me, hired me without ever meeting me on the basis of a short film I made and sent him called The Texas Chainsaw Manicure (in which I played The Hitchhiker). Tobe loved what I was doing with Chop-Top, encouraged my many ad-libs & my manic mayhem. I just kept pinching myself to make sure I wasn’t dreaming because working for Tobe was a dream come true!

After Chop-op you appeared in such horror films as The Blob, Silent Night, Deadly Night 3, what is it about the horror genre that interests you?

I’ve always been drawn to horror movies, scary stories around the campfire, Halloween hi-jinx. Never really psycho-analysed it, but there’s a certain charge in fear, and in most horror movies, the world as we know it is turned upside down. Plus, I like to be on the monster side of things.

You worked with Tom Savini on the remake of George A. Romero’s Night of the Living Dead. How did you get involved with the project?

Tom Savini and I became pals on the set of the Texas Chainsaw Massacre 2. Tom and his merry band of sadists did the makeup (for Chop-Top, Leatherface, LG, etc) in the studio I dubbed the House of Pain. We all got along famously, and when George Romero tapped Tom to direct the colour remake of Night of the Living Dead in 1990, Tom sent me a script and told me to pick any part. I went with Harry, the bad guy in the basement, because Harry had the most days (and best earning potential) of the characters I qualified for. Tom then clarified: “Pick any character, just make sure it’s Johnny.” So I got to say, “They’re coming to get you, Barbara” in my best Boris Karloff accent. Since then, Tom and I have remained fast friends via the horror convention circuit. 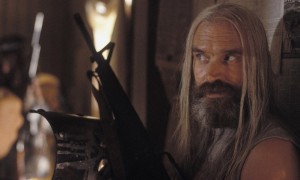 One of your most notorious performances to date is Otis B. Driftwood. Was there ever a time when you were shooting that you took a step back and thought that “this is too far”?

Shooting The Devil’s Rejects in 30 days was hard enough, but there were a few particularly hairy scenes. The toughest for me was the pistol rape scene with Priscilla Barnes at the Kahiki Palms hotel. Thank God Priscilla was up for it and as committed to the scene as I was! That made a difficult job a little easier, but consider that we had to do probably 20 takes of that scene from different angles, with different lenses, etc! Rob Zombie encouraged me after the first take by reminding me that “Art is not safe.” And based on that scene, he’s tellin’ the truth. But we got through it, and I look back proudly on it as one of the most challenging and rewarding scenes I’ve ever acted!

To prepare for a role, I rely on the script, try to read it several times until I get the general story, the lay of the land if you will. The screenplay usually provides you with all you need to know about your character: who he is, where he’s coming from, what he wants, who his friends are, his enemies. I try to do the inner work first before I start speaking the lines out loud, before I even get into the lines. Once you know who you are, what you’re doing, the lines come more trippingly off the tongue. As for being considered a horror icon, that sounds a little extreme. I consider myself one lucky son of a bitch who’s been handed characters like Chop-Top, Otis Driftwood, Luigi Largo (Repo, the Genetic Opera) and told to go for it! Hell, I just voiced a character for the Teenage Mutant Ninja Turtle cartoon series!

Which has been your favourite horror role to date and why?

Favourite horror role? I love Otis, but it’s got to be Chop-Top. Chop-Top just feels the most like me.

Okay. So which director that you have worked with provided you the most support as an actor during the shoot?

Again, as far as director support, I’d have to go back to the great Tobe Hooper as both teacher and enjoyer of what I did in TCM2.

Speaking strictly about your experience of horror conventions, what has been the most extreme fan reaction to you?

Extreme fan reaction? There was a young girl at a convention in Atlanta a couple of years ago who was so moved when she saw me from across the convention hall that she burst into tears and started screaming, “Oh my God! Oh my God!” Her mom had to steer her out of the room and get the poor kid under control. I was shocked, frightened, impressed and pleased all in the same moment. Incidentally, the girl has gotten it together, and now when she sees me she smiles, comes over and says hi.

So what’s next for Bill Moseley? What can your fans expect to see? Are there any current projects that you would like to speak of? 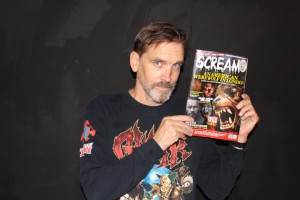 Next up for me it’s back to Australia to work again with director Chris Sun on his giant pig movie, Boar, which Chris describes as “Jaws on land.” Then it’s New Mexico for a movie called The Ranch. In November, I make my rock debut in San Antonio, TX, with buddy Phil Anselmo in our band Phil & Bill.

Thanks for talking to SCREAM, Bill.

My pleasure. Thank you.