Gareth Edwards’s 2010 sci-fi chiller Monsters was a triumph of low budget filmmaking, telling a human story while keeping its creatures hidden for the most part, and displaying some impressive SFX when they do show up. The film, which was followed in 2014 by lacklustre sequel Monsters: Dark Continent, began a glittering career for Edwards, who went on to direct 2014’s Godzilla and later, Rogue One.

As reported this last week by Deadline, Vertigo – who released Monsters in the US – are teaming up with the UK’s Channel 4 to develop a series based on the indie hit. Edwards is reportedly committed to be involved in a behind the scenes capacity, with his full involvement to be determined when the project has been fully greenlit. 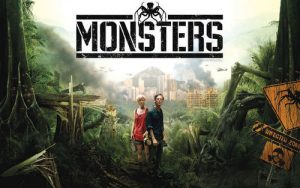 The series is currently in development at Channel 4, who are hoping for the same success as its Philip K. Dick anthology series Electric Dreams and sci-fi drama Humans. Top Boy creator Ronan Bennett is set to act as showrunner, with Daniel Fajemisin-Duncan and Marlon Smith writing the script. The producers are looking to secure a major U.S. partner and are currently in talks with broadcasters and SVOD services including Netflix and Amazon.