Synopsis:
A Swedish pilot and US covert ops crew get trapped underwater in a mini-submarine, somewhere off the Yellow Sea coast of North Korea. After the craft hull is breached, the crew must repair the damage in order to return to the surface before time runs out and the ship fills with water. 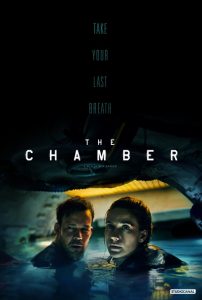 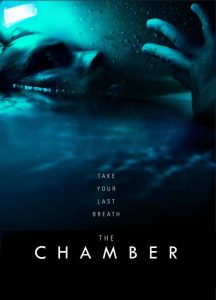 A claustrophobic submarine setting seems the perfect environment for a horror film to take place. While the single-set location might not lend itself to the big screen in terms of visual spectacle, the enclosed space, dark corridors, blinking red emergency lights and pulsing sonar could contribute to an edgy atmosphere along with the lack of air and an unbalanced crew, terrified of drowning or being eaten by sharks. Sadly, writer/ director Ben Parker fails to efficiently use these components for his debut feature The Chamber. The film stalls due to flunky production values, ersatz performances, spurious, invasive lighting and script defects. Story blunders take the form of awkward foreshadowing, exposition heavy dialogue and a flimsy narrative which goes nowhere, like its characters.

A nifty opening credit sequence, spliced with North Korean news footage, fittingly imparts the air of an 80s/ 90s action flick, while memories of sub horrors/ sci-fis such as: Below, The Rift and Leviathan are evoked, not because they are hugely comparable but simply due to the fact that there are so few films in the sub sub-genre. An imperious, militarised, Alan Silvestri-type score by Manic Street Preachers front-man James Dean Bradfield, conjures crotchety nostalgia but, unlike the aforementioned submarine horrors, The Chamber has been crafted with a fraction of their budgets.

Following the tight, tension loaded set up which contributes a portentous mood from the outset, we are introduced to cantankerous antihero, Mats: a gruff everyman pilot with the demeanour of a Kurt Russell or Bruce Willis type, both of whom could have starred in a bigger budget version twenty years ago. Mats’ submersible is manned for science but the pilot is instructed to escort shady US covert op Edwards/ Red (Charlotte Salt) and her two navy gofers to the seabed in search of a government/ naval McGufin. But the surreptitious guests have top-secret strategies which they have no intention of sharing with Mats. 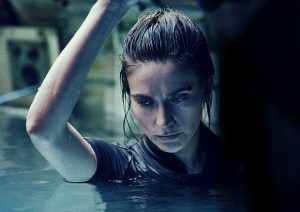 Incidents involving drones, detonations and data extraction dot the plot before the sub spins and starts filling with water. When a de-wedge attempt goes pear shaped, one crew member is injured while another buds into an unparalleled nut-bag and threatens to kill everyone. Mats’ and Red’s fight for survival intensifies while the film they’re in paradoxically flat-lines. The Chamber fails to frighten viewers as much as its characters, or make for very beguiling viewing. Even Mats and Red dither about distracted by their dilemma while vocalising problems which could be interpreted within a wider context: “we’re in a bad way and need to figure out what we’re doing”.

Slovenly performances contribute to The Chamber amounting to nothing more than a pound-bin pot-boiler but Will Gilbey’s editing is excellent and some well-choreographed scraps see crew members exquisitely gored and macerated. The Chamber may be pithy and energetic for a short while but it’s mostly a subpar, slapdash horror/ thriller with achingly grating acting and dialogue. Occasional tense moments and a brisk pace go some way to distract from the lack of novel drama and characters, despite superficial tension between them, but sadly Ben Parker’s debut is lacking panache, tact and enough scope to be laudable.