Chad Archibald’s Harrowing ‘The Heretics’ Trailer Will Possess You

If you picked up issue 42 of SCREAM Magazine then you’ll most likely be well versed in Chad Archibald’s latest chilling concoction of cult possession and body-horror, THE HERETICS, which recently enjoyed a successful industry screening at the 2017 European Film Market and a sold out World Premiere at The Canadian Film Fest. 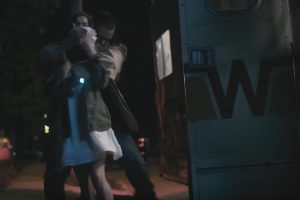 Starring familiar Black Fawn faces Nina Kiri (TV’s “The Handmaid’s Tale,” Let Her Out), Ry Barrett (The Drownsman, Neverlost, and The Demolisher) and, with a breakout performance from Australian newcomer Jorja Cadence, The Heretics follows Gloria, a young girl who finds herself taken hostage by a shady soul who’s convinced a cult is tracking her down. Gloria soon falls ill, undergoing a series of terrifying transformations, and it becomes increasingly apparent that the cult is the least that she, or her captor, should be afraid of.

Commenting on the journey The Heretics took him on, Archibald said, “We’re excited to finally be sharing it with audiences across the world. This trailer kicks off a slew of exciting announcements that will be coming in the next few weeks.”

Produced by Cody Calahan, Chad Archibald and Christopher Giroux with cinematography by Bed of the Dead director Jeff Maher, The Heretics is currently on its worldwide festival tour with a number of festival screening announcements set to roll out in the coming weeks. In the meanwhile, whilst horror fans were treated with a brief teaser back in March, it’s now time to build your anticipation for the film even further with the first full nightmarish trailer…