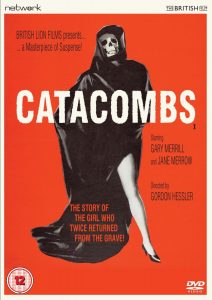 American character actor Gary Merrill is Raymond Garth, unhappily married to Ellen (Georgina Cookson), a highly successful businesswoman who holds the purse strings and generally wears the trousers (how’s that for a metaphor mix?) while he doesn’t appear do much of anything besides drinking Scotch.

When Ellen’s young, pretty niece Alice (Jane Merrow) returns from an extended sojourn in Paris, Raymond is instantly besotted with her, and it’s not long before he’s scheming with Ellen’s disgruntled PA, Dick (Neil McCallum), to have the old girl done away with. Things quickly come to a head and the deed is done, but do Ellen’s past dalliances with a mysterious brand of spiritualism mean that she’s not as ‘dead’ as the two had hoped?

This neat little British Lion programme filler from 1965 is chiefly of note for marking Gordon Hessler’s big screen début. The German-born director cut his teeth on ‘Alfred Hitchcock Presents’, but is best known to genre film buffs for SCREAM AND SCREAM AGAIN, CRY OF THE BANSHEE and THE GOLDEN VOYAGE OF SINBAD, along with later exploitation fare like PRAY FOR DEATH and RAGE OF HONOR

CATACOMBS plays almost like an extended episode of ‘Hitchcock’, and, after the kind of leisurely start characteristic of the period, Hessler does a fine job of cranking up the suspense. Of course, the two men’s convoluted scheme is doomed to failure from the start, but it’s the anticipation of the exact nature of this failure that keeps us watching. While stiff and reserved in some ways (yep, it’s British), the film also has a sexual frankness that probably bristled a few feathers back then. 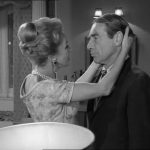 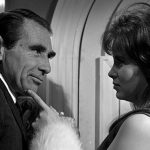 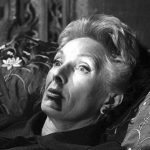 Perhaps I’m coming from a more enlightened (or smug) C21 standpoint – or maybe I’m just a decent human being – but the supposedly ‘insufferable’ Ellen doesn’t seem so bad, really. In this pre-feminist milieu Ellen is guilty of the twin crimes of being a successful, powerful woman and, even worse – talking a lot. A sign of the times can also be found in the fact that boring, lazy, fifty-something, functioning alcoholic Raymond seems to be Grade A catnip as far as Ellen and Alice are concerned. And, to a point, it seems that our sympathies are supposed to lie with him. Why, anyone would think that the film was bankrolled and written by a bunch of middle-aged men. 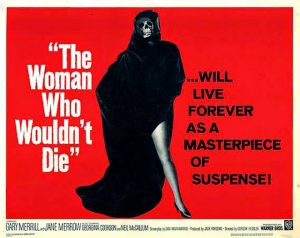 However, nothing here is really as it at first seems – and I don’t want to spoil any of the twists for you.  Cookson is highly entertaining in dual roles as Ellen and the jobbing actor that the men hire to be her double and also murder, as part of their complicated plot. A distinguished Brit character actor of stage and (mostly small) screen, she boasts an impressive list of credits as long as your arm. If you recognise Canadian actor Neil McCallum, also the film’s co-producer, it’s probably because he’s the lead in the ‘Werewolf’ segment of the following year’s DR TERROR’S HOUSE OF HORRORS. Jane Merrow also had prominent roles in Terence Fisher’s NIGHT OF THE BIG HEAT and Hammer’s HANDS OF THE RIPPER.

Sunday afternoon fare, perhaps, but solid stuff on a low budget, even if it is unlikely to “live forever as a masterpiece of suspense”.