Early this year, it was announced that Screen Gems was developing a reboot of the 1998 horror film Urban Legend—and casting is officially underway. 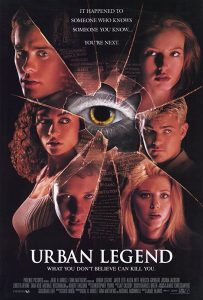 Colin Minihan (Grave Encounters) is writing and directing the new film, which will reportedly introduce an iconic new slasher for the digital age in a world where internet urban legends are born and move at a terrifying pace. The movie will center on a diverse cast of college students as they navigate a series of bizarre deaths that resemble urban legends linked to the darkest corners of social media.

According to Collider, Sydney Chandler and Katherine McNamara are in talks to star in this fresh take on the franchise. The original film, which was directed by Jamie Blanks and written by Silvio Horta, starred Jared Leto, Alicia Witt, Rebecca Gayheart, and Tara Reid.