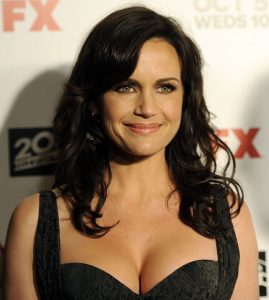 It was announced earlier this year that horror’s current hottest property Mike Flanagan (Hush, Ouija: Origin of Evil) was to direct an adaptation of Stephen King’s Gerald’s Game for Netflix. With production now underway, we can share a little casting news with you.

Carla Gugino (Watchmen, Sin City, The Unborn) will lead as Jessie, with Bruce Greenwood (Star Trek, Super 8, Disturbing Behaviour) as her husband Gerald. The romantic game of the title sees Jessie handcuffed to their bed, where she spends the bulk of the story. Henry Thomas (Ouija: Origin of Evil, Gangs of New York), Carel Struycken (Men in Black), Kate Siegel (Hush, Ouija: Origin of Evil, Oculus), and Chiara Aurelia (Big Sky, Pretty Little Liars) round out the confirmed cast. 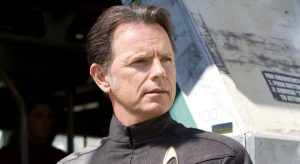 Synopsis:
Gerald’s Game follows Gerald and Jessie Burlingame, who have gone to their summer home on a warm weekday in October for a romantic interlude. After being handcuffed to the bedposts, Jessie tires of her husband’s games, until things take an unexpectedly tragic turn. Still handcuffed, she is trapped and alone. Painful memories from her childhood bedevil her. Her only company is a hungry stray dog and the voices that populate her mind. As night comes, she is unsure whether it is her imagination or if she has another companion: someone watching her from the corner of her dark bedroom.

While there’s seldom too long a gap between King adaptations, the last couple of years seem to have seen a renewed rush to put his works onscreen. TV series of Under the Dome and 11.22.63 have found some success, as did the recent film Cell, and we of course all eagerly await the (hopefully) definitive screen versions of both It and The Dark Tower. A TV reimagining of The Mist is currently in production, and casting is presumably still underway on the new Pet Sematary.

“Gerald’s Game has been my dream project for nearly twenty years,” Flanagan says in Gerald’s Game’s press release. “As a lifelong fan of Stephen King, it is a true honor to be trusted with this amazing material. I am deeply grateful to my long-time partner, Trevor Macy, and to my new partners at Netflix for making this dream project a reality. This is one of the reasons I wanted to make movies in the first place.”