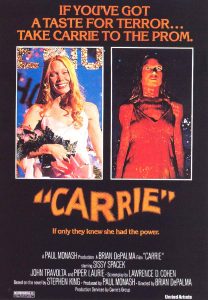 Carrie White is dealing with the problems that come with adolescence. Her life is under constant duress from her peers at school, as well as her religious fanatic of a mother. While showering in the high school gymnasium, she begins to undergo her first menstruation. Unaware of what’s occurring, she breaks down, and is subsequently harassed by the other girls in the locker room. While the humiliating event triggers her secret powers of telekinesis, some bullies plan a cruel joke at her own expense.

Stephen King is probably the most recognisable name in horror. He’s gone from being an author, to becoming a cultural icon and a household word. Almost everyone is familiar with his work, his legacy, and his ever-growing list of contributions. Over the past four decades, countless adaptations of his writing have made their way to the screen.  From Kubrick to Cronenberg, it seems almost everyone has made an attempt to bring King’s words to life. In all fairness, a Stephen King adaptation is always hit-or-miss. For every one that’s exemplary, there are at least three that are forgettable.

The first effort to reach the screen came in 1976 from director Brain De Palma. Based on the novel of the same name, Carrie has gone on to be one of the most celebrated King adaptations of all time, as well as one of the most iconic horror films of the 1970’s.  Even today, we still find ourselves drawn to the story of abuse, bullying, and revenge. Merging the supernatural with the familiarity that comes from the struggles of adolescence, its star hasn’t dimmed over time. The image engrained in our minds of a young girl in a white dress draped with blood has become just about as iconic as King Kong climbing the Empire State building.

The story focuses on high school student Carrie White–an awkward girl whose life takes an unexpected turn. From a storytelling standpoint, Carrie is the ultimate protagonist. A victim on all fronts, she’s a character the audience can’t help but empathise with. Because of her vulnerability and naivety, the torment that’s inflicted upon her resonates with us so much more. At the same time, it builds utter contempt for the people who inflict dread and suffering upon her. In a role that seemed tailor-made for her, actress Sissy Spaceck brings King’s title character to life in a very real way. Her wholesome girl next-door persona that she’s able to project is flawless in its overall appearance. In contrast, her mother, played by Piper Laurie, is the definitive crazed and sheltering parental figure. Her religious fanaticism, which almost borders on psychosis, is almost terrifying. When we’re shown what Carrie’s home life is like, it’s genuinely unnerving. It reinforces the fact that she has no solace or refuge from the world that she has to exist in. Laurie’s performance easily rivals that of Faye Dunaway’s crazed portrayal of Joan Crawford in Mommie Dearest.

Unsurprisingly, Carrie’s greatest antagonists come in the form of high school bullies. Aside from them being thoroughly contemptible with no redeeming qualities, they’re everything you’d expect to find in a group of unscrupulous villains. They almost seem like a terrorist group, complete with their intricate conspiracy to get one over on Carrie at any cost. Not surprisingly, De Palma utilises an old technique to relate this to the viewing audience.

If there’s something that’s well known about De Palma, it’s his deep admiration for Alfred Hitchcock. Needles to say, the inspiration from the legendary auteur makes its presence felt. In his 1935 film Sabotage, Hitchcock told the story of a terrorist bombing in London. Throughout its entirety, it’s constantly reinforced about what’s going to be taking place in the events leading up to the climax. The audience is made aware early on, and almost nothing is obscured from them. The climax in Carrie is structured in a very similar fashion– with emphasis placed on the long build up that leads to the inevitable conclusion. It’s the twisted plot of revenge that the antagonists carry out, which is stretched over the course of the narrative. It’s a slow burn of suspense, which even culminates in a crescendo of screeching violins. (A la Psycho.) Carrie’s sudden transformation from shy girl to harbinger of destruction is shown as some sort of nightmarish spectacle. As the cameras move erratically, all hell breaks loose, and those involved in the prank receive their ‘just desserts’ as it were. Carrie’s wide-eyed facial expression tells more in one scene that any amount dialogue possibly could. 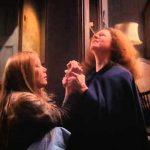 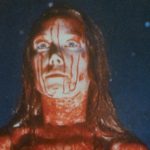 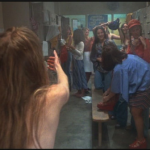 A faithful adaptation to the source material, very little was changed for the screen. The key difference being the discovery of Carrie’s powers coincides with the films menstruation scene in the beginning. De Palma utilises King’s original feminist commentary within the film, which is very up front. Carrie is someone who’ oppressed, humiliated, shamed, and in the end, finds a way to rise above it all. The most effective horror is always relatable to us in some way or another. In all the years that have passed, it still manages to relate to us in a way that other films simply can’t. Although King’s story been reimagined twice, once as a sequel and a remake—it’s De Palma’s vision that will always remain the definitive adaptation.