Netflix’s upcoming series The Haunting of Hill House is shaping up to be a tasty proposition indeed, and the latest piece of casting news can certainly do no harm. Set to play one of the leads is Carla Gugino, who is known for impressive turns in the likes of Sin City, Watchmen and American Gangster. Gugino is the second cast member to be announced, joining Michiel Huisman (World War Z, The Invitation, Game of Thrones).

The 10-episode series is a contemporary reimagining of Shirley Jackson’s classic 1959 novel, which was first adapted by Robert Wise in 1963 for his masterfully terrifying horror classic The Haunting. The film was remade as a worthless mess of CGI and fright-free spooks in 1999 by Jan de Bont, but the less said about that the better. 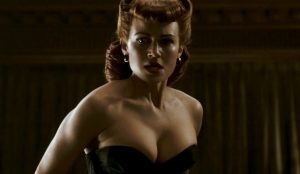