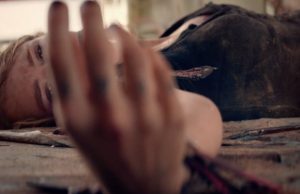 Cannibals stalk an isolated Texas wasteland in upcoming flick The Bad Batch, the second feature from A Girl Walks Home Alone at Night director Ana Lily Amirpour. And with the director of the meditative, poetic vampire yarn at the helm, you’d be forgiven for being a little surprised at the assembled cast.

Synopsis:
Arlen (Waterhouse) is unceremoniously dumped in a Texas wasteland fenced off from civilised society. While trying to orient her unforgiving environment, she is captured by a savage band of cannibals and quickly realises she’ll have to fight her way through her new reality. As Arlen adjusts to life in “the bad batch,” she discovers that being good or bad mostly depends on whom you’re standing next to.

Not that we’d expect less from Amirpour, but the trailer suggests something seriously cool. The Bad Batch – which played last year’s Toronto International Film Festival and Fantastic Fest among others – will hit US screens on June 23rd.