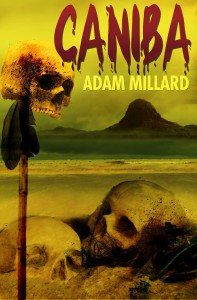 It’s been a great year or so for cannibal fans. There have been Blu-ray releases of the classics, Cannibal Holocaust and Cannibal Ferox, and we’ve had Eli Roth’s cannibal homage, The Green Inferno, in movie theaters. This rediscovery of the horror sub-genre has been reflected in the new cannibal fiction popping up – which brings me to Caniba by Adam Millard.

In a horror book, you know a tropical paradise is not going to be as it appears. So it comes as no surprise that Rose has an uneasy feeling as she touches down on the island of Grand Bahama in search of her missing sister, Emily.

After Rose and her companions, Debbie and Marsha, arrive at the island, they begin handing out flyers looking for anyone who might have seen Emily. Nobody wants to say anything but she meets some interesting locals who allude that everyone knows what goes on when people go missing on the island. This was a part of the book I really enjoyed, with Rose trying to seek out leads and learning the reactions to her questions. It really sets up the tension and a sense of unease about the paradise. This feeling continues in the descriptions of the conspiratorial relationships between the powerful islander Deon and those who work for him. I really would have liked more of that story and intrigue.

Rose is a strong character, even if she does make some dubious decisions. There is fun banter between the girls, especially from the air-heady Marsha, who is really ditzy and entertaining. You genuinely care about what happens to them.

So, as you would expect, we reach a point where our heroines are pitted against the cannibals. The vivid descriptions of the cannibals and their culture, rituals, dancing, and behaviors were great. Getting to know them gave more of a sense of danger than if they were just faceless hunters. This was really well done by the author, setting up for some observation of the antagonists by Rose.

Is the cannibal sub-genre too set in stone? It seems hard to bring a new spin. You know what you’re getting. Don’t get me wrong, it’s entertaining, but there is nothing new. It’s like an old pair of slippers. We need someone to write a book about space cannibals or cannibals on a plane or something. What this book did really well was set up the back story and build the tension rather than have characters just stumble across hungry natives. The ending is also not your typical cannibal fair and was a refreshing spin. I really enjoyed this, and you should too!