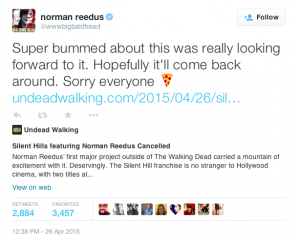 We have some sad news for all you Silent Hill, Del Toro and Reedus fans – it has officially been confirmed that Silent Hills will not longer be haunting us in the near future.

Last August we were given a sneak peak at all the horrors that lie awaiting, when Sony released P.T. (Playable Teaser), an interactive PlayStation 4 game from Konami. The terrifying take on the classic horror game featured Norman Reedus (The Walking Dead), and promised that we would be getting a full game entitled Silent Hills, created by the mangled minds of Guillermo Del Toro (Pans Labyrinth) and Hideo Kojima (Metal Gear Solid).

Konami is currently still working on a new Silent Hill game series; however, it will not be the anticipated version as Del Toro confirmed the cancellation of his project at a film festival in San Francisco. Norman Reedus also confirmed the disappointing news, taking to Twitter to let fans know that the rumours were true and he is as devastated as we are.

The reason for the cancellation is not known, but there are rumours that Kojima will not be working at Konami by the end of the year, hence why the game may have been pulled.

We hope there’s a slither of chance that in the future, this disturbing version of the most traumatising horror game will come back again.