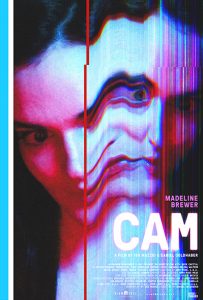 Online and real-world identities blur and clash in the psychological/supernatural horror outing Cam, which stars Madeline Brewer as erotic webcam performer Lola. This young lady, whose real name is Alice, is fixated with moving up the highly competitive rankings on the site on which she does her live streams, going to such extremes as faking her own suicide to try to climb all the way to the elusive number one spot held by the aloof BabyGirl (Imani Hakim). Lola finds that fame is indeed fleeting when she finally hits the coveted number 50 spot, only to drop down in the ratings seconds later when rival PrincessX (Samantha Robinson, star of Anna Biller’s terrific The Love Witch) promises to break her no-nudity rule if Lola’s followers switch over to her stream.

Trying to navigate her online life while hiding it from her mother Lynne (Melora Walters) and attempting to keep a safe distance from such obsessed online fans as TinkerBoy (Patch Daragh), Alice finds things going from difficult to bizarre to terrifying when an evil doppelganger-like presence takes over her cam channel, freezing her out of her profits while reaching heights of success about which Alice only dreamed. As Alice/Lola tries to uncover the mystery of what is happening to her, she begins to break down mentally, physically, and financially.

Former sex worker Isa Mazzei wrote the screenplay for Cam, giving the film an air of authenticity to the protagonist’s double life as Alice with her “real” family interactions and to Lola’s cam room performances. Daniel Goldhaber (who also gets a story credit) serves up a colourful, well-paced outing with thriller and mystery elements that make the horror scenes all the more effective. The candy-coloured computer screen world of Lola’s room sometimes features subtle nods to the bright lighting design made famous by such Italian horror luminaries as Mario Bava and Lucio Fulci, with Alice’s “real world” scenes often featuring a fittingly less pronounced style.

Goldhaber and Mazzei address issues of social media dualities and dangers, while delivering a suspenseful chiller featuring a bravura performance from Madeline Brewer. She juggles three different personas, playing a wide range of emotions, and nailing everything from the subtlest of emotional changes to harrowing heights. Cam is a captivating slice of cinema that horror and psychological thriller fans alike should seek out.