The Cabin in the Woods to get a 4K Release

4K is the next level in film watching quality, but how many people are willing to fork out £40 for one 4K disc release? Personally, not me. However, as the releases get more common and the TVs go down in price, hopefully 4K will no longer be an indulgent splurge.

The Cabin in the Woods is joining the ranks of 4K and rightfully so. It’s one of our favourite films from the last decade as it re-invented a tired genre in a smart, funny and sometimes scary way. It also features a great cast that includes Chris Hemsworth, Jesse Williams, Kristen Connolly, Anna Hutchison and Fran Kranz. 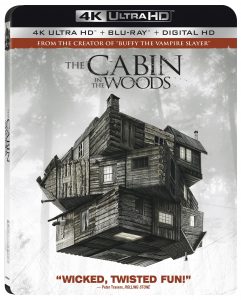 Synopsis:
A rambunctious group of five college friends steal away for a weekend of debauchery in an isolated country cabin, only to be attacked by horrific supernatural creatures in a night of endless terror and bloodshed. Sound familiar? Just wait.