Buffy’s Giles to Get Own Comic Series 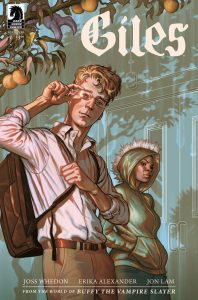 If Buffy the Vampire Slayer taught millions of weird girls anything, it’s that you too can slay vampires. Like Xena, Dana Scully, and the Spice Girls before her, she proves that girl power never went out fashion and that bad guys suck. Thanks in part to her staying power, Buffy has remained successful years after the show was taken off the air, most notably in Dark Horse Comics’ Buffyverse, which launched not only Buffy-centered comics but ones that explored the lives of her friends and family as well. Adding to the expanded universe, Dark Horse has announced that fan-favourite Rupert Giles will be getting his own series later this month.

Played by Anthony Stewart Head in the show series, Giles was originally a mentor and ‘watcher’ to Buffy, serving as a surrogate father figure to the young slayer. In the new series simply titled Giles, our lead will be transformed into a younger and prettier self while becoming the same age as his protégé, a high schooler! Though he’ll still have his middle-aged mind, he’ll be trapped in the puberty filled human sack known as a 16-year old boy. Grody. The comic will also be a true stand-alone and will not feature any of the old gang or even Sunnydale, allowing for new readers to jump on without requiring a backlog of comic knowledge.

The writer Erika Alexander, who is sharing writing duties with Joss Whedon, presents her own opinions on the work:
“I love writing the schizophrenic nature of Giles being stuck in a teenaged boy’s body burdened by the knowledge of a middle-aged man. Let’s just say dealing with puberty ain’t his only mid-life crisis. And Giles will struggle with his past deeds when he is confronted by a vampire who resists being categorised as a monster.”

She also hints at a new female character:
“She’s pretty nifty. Also, because he’s lived before, Giles is apt to run into a friend or two who, as the old saying goes, ‘know him from another picture.’ Joss will decide if any of this transfers over to future Buffy stories. But my hope is that his colourful new partner gets a series of her own adventures.” 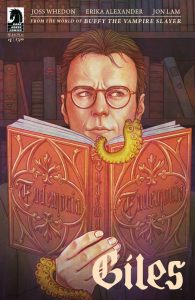 Sounds like an interesting read! Check out the official synopsis and make sure to pre-order your copy today! Out Feb. 28.

From Joss Whedon and Erika Alexander comes a series that returns Buffy’s Rupert Giles to high school! But this time–as a grown man living in a teenage body–Giles will be a student instead of a teacher. At an inner-city LA-area school, when a mystical influence is detected and teachers start to go missing, Giles enrols to investigate. What he finds is more than vampires and demons; something unusual and frightening is happening here. If Giles can get through one day as a student, he’ll have a chance to find out who, what, and where–but high school is still hell, y’all.