Bruce Campbell Talks Getting Back Into the Groove in Ash Vs. Evil Dead

After spending the last 30 years avoiding any kind of responsibility, maturity and, most importantly, Deadites, Ashley J. Williams (Bruce Campbell) is about to become mankind’s only hope as a plague of everyone’s favourite wise-cracking demons threatens to have their evil way with more than just the inhabitants of a cabin in the woods this time around. 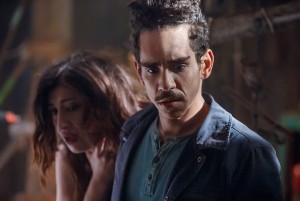 With a supporting cast comprising of Lucy Lawless, Ray Santiago, Dana DeLorenzo and Jill Marie Jones and under the executive production of Campbell, Sam Raimi and Rob Tapert, the groovily-anticipated STARZ series Ash vs. Evil Dead will finally premiere this Saturday, October 31st.

It’s great to get back to this character. It’s probably the most fun character there is to play. Now we can use all of our experience to barrier on this character again and flesh him out even more.

I’m glad we had something to finally show fans where I’m not put on the spot all the time to try to make crap up. You know I’m attracted to bombs. We’ve got to clarify that! The bombs! The last three bombed. They were the most expensive. They were TOO expensive. They didn’t make any money so people began to think we were lazy or we didn’t want to go back to it. I got news for you, pal! There’s no money in the bank for it. You’re not making anything if there’s no money. So it’s just the raw truth of it. Thankfully, the fans have stepped up through all the DVD reissues. There were 86 versions of Army of Darkness after that. It became an American movie classic, you know, on AMC. And so fans drove it and they drove it at these personal appearances by tour since ’88. They haven’t let it go. So they finally got it. So regardless of what I said, when I said it or how I said it, we’re here and it’s a good day.

The show also reminded me of how much I hate fake blood. That hatred it runs deep. It runs really deep! One of my least favorite things is adhesive, surgical adhesive, and they had to use that for appliances, makeup appliances and, yes, fake blood, because it’s chronic, it gets everywhere.

On what he looks forward to being able to do with Ash’s persona: 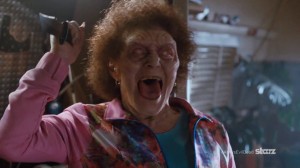 Well, you know, people have only seen four and a half hours’ worth of Ash. In this first season alone we’re going to do five new hours of Ash. So I’m actually looking forward to finally seeing how Ash is going to interact with other people now. He has to be a leader. So it’s a slightly different story in that the character has to evolve. The story has to get bigger and I’m looking forward to that so that I can take enough time to finally be with Ash.

I think we’ll start see more of a leader with Ash – a little more of actual hero qualities – and, you know, the jerk stuff will still be there. Pure Ash. This time around we’re going to hopefully see a likely improved Ash. We’ll see.

On being unable to reference Army of Darkness in the series:

That’s not material that we can do legally so we’re not going to do it. It’s a whole complicated bunch of legal mumbo jumbo that’s not even worth going into. The three movies were made by three different companies so that should tell you to call your uncle the lawyer and talk to him about it. He’ll laugh. He’ll go, “Really? Three movies, three companies and you want to make a TV show? This should be fun.” So it’s very complicated to put together and I’m just really grateful that it all worked out. Here we are, but it means there are things we can include, things we can’t. But everything that Ash needed was in the first two movies anyway so it’s all good.

On why STARZ was the way to go with the series:

They had what we needed. They gave the budget we were looking for and they gave us the leeway we were looking for and they give us unrestricted content that those movies demand. They were actually the only company that I’m aware of out there that could give us that criteria and that did it. That sealed the deal right there. And look, these guys are growing as a company. I like being part of companies that are growing and expanding rather than shrinking and contracting. They’re willing to stay on the cutting edge and they want to do shows that people not only like but they like a lot. And I think we provided something like that for them and I think we’re attracted to them because this show can actually play around the world. Not all TV can. We started overseas and in the UK and then spread over the world. I think we’re good partners. I think we’re good for each other.

On how much he shared Sam Raimi’s love for H.P. Lovecraft growing up:

I didn’t give a rat’s ass about Lovecraft. I read lots of Spiderman comics. I read a comic called Sad Sack. It was a silly army comedy comic. We didn’t get into horror until we decided to make our first feature film because horror was the only type of genre where you could make cheap movies and no one cared. You couldn’t make a cheap drama. That would be too low budget. Dramas had to have good photography and well-known actors and stuff. With horror films you could still make drive-in movies back in those days so that’s what we did.

On the possibility of expanding on the kind of creatures Ash will face:

It’s not like we’re going to have a creature of the week but Ash is going to meet many new demons and entities and forces he has not encountered before. That’s the cool thing of doing a weekly TV show. You can hit him with a bunch of demons.

On working with the rest of the cast:

As Executive Producer I pick my battles in what I get involved in and one of them is casting because I know I’m going to be stuck on a set with those people. We went through a lot of rigorous stuff. We had to make sure these people were healthy and rigorous and had a lot of patience and could deal with a lot of special effects – a lot of just difficult, uncomfortable film making.

So Ray (Santiago) I thought we got fortunate with. He’s got a spectacular way about him. He’s got a great mug and he’s a sweet guy. My hope is to go to conventions with these guys and watch them get swamped. That would be the greatest joy of mine, to watch Dana and Ray and Jill go to these conventions and be tormented. It would make me very happy.

I like having co-stars because now I only get a third of it. Now they get part of it. Spread the love, man. Spread the blood around. And it was great to see them all being initiated. That was a wonderful experience to see the true horror and shock on their faces when they see that stuff. The reactions on each face! You could tell Ray’s expression was totally pissed, and it’s great because it works perfectly for the scene. When they first get hit with the blood none of us have to act because we’re all like, “Oh my God,” because you act just like you would.

Lucy Lawless is a badass too. She’s a great addition to the show. She can step in and do anything we need her to do, which is spectacular. She’s a great actress with an incredible amount of versatility. She can do comedy, which is great, and she can kick ass so we’re lucky, lucky, lucky. I think you can look forward to her having an increasingly expanding role in this show and that’s critical to me because I’ve always loved Lucy. 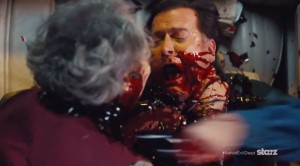 On working with a bunch of different directors on the series:

It’s heartbreaking because you’re used to the old man (Raimi) yelling at you. If somebody starts yelling at me I’m like, “I’ll punch you in the face, man.” There’s definitely an adjustment.

We found a great set. The guys were really happy with the directors that we had. I have no complaints. It’s hard on everybody. It was me missing the old man and probably directors going, “What’s with this guy?” because we had to figure everything out but I feel I’m the voice of Ash so I can be at least a constant influence on the character.

On some of the more crazy ideas people have pitched him about Evil Dead:

It was mostly the one with a conversation with New Line about doing Ash versus Jason versus Freddy. I was interested because I wanted to kill them both but we were informed that no one is killing anybody and we would only have control over what happens to the Ash character. We couldn’t control the story. We couldn’t control what Ash does to anybody else. I’m like, “This sounds really not creative,” so I’m so glad that we’re back to this again because we can finally do it right.

On modern day trends in horror he wanted to avoid:

Torture forms, just because it’s a bore. I don’t care one way or another about it. It’s just low grade film making. I would just like to focus on a variety of horror. I want to mess with people’s minds. You want to startle them. You want to shock them. You want to disturb them. And you want to keep them on edge.

On the possibility of continuing the series:

Every show that’s designed as a TV show has to be designed for multiple seasons. It will feel contained. I think you will feel very satisfied by the end of the season but there’s no question about it, it’s designed for more. The first season I think is definitely putting the genie in a bottle. After that, you get to see what roots take hold. [update: Starz has since treated fans of the Evil Dead franchise to the groovy news that Ash vs. Evil Dead has been renewed for a second season]

Surely Groovy Bruce has convinced you not to miss the season premiere for anything but, just in case, here’s the promotional trailer to give you a glimpse of what’s waiting for you this Halloween in the STARZ Original Series, Ash vs Evil Dead: