Bruce Campbell is Confident For a 2nd Season of Ash vs. Evil Dead 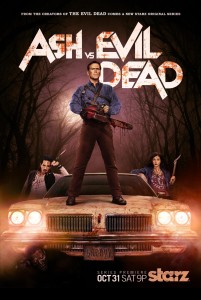 The premiere of Ash vs. Evil Dead is looming ever closer and to further our unstoppable excitement, Bruce Campbell has expressed his confidence in the show being renewed for a second season. During an interview with Forbes the Ash actor said:

“I’m pretty confident there’s going to be a season 2 because you have to do so many things now to get ready for when you’re about to shoot, like get warehouse space, re-upping your lease, getting a writers room going… well, those things are happening. So, I’ll just leave it at that.”

It seems as though everything is already full steam ahead for season 2 and we haven’t even had the first season yet! Not that we’re complaining. There has been a lot of positive buzz surrounding the first episode of the show already; you can watch the first 4 minutes below which shows Ash rocking out to Deep Purple and telling a cheeky little lie. If Bruce Campbell’s words and those few minutes are anything to go by, then we’re in for one crazy and bloody hell of a ride.

The first episode comes from Evil Dead director Sam Raimi and is set to air on the Day of the Dead itself, 31st October. Make sure you cement the show’s second season by tuning in and showing your support!

And to whet your appetite for the show, here’s the first 4 minutes: