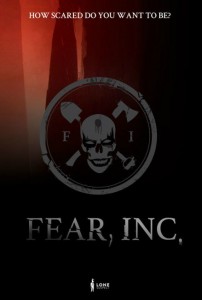 It’s definitely not something you’d ever see me pay for, but Lone Suspect’s latest endeavour follows a company who can be hired to frighten you: Fear, Inc. It’s an interesting and frightening concept, where the ideas are literally endless. I imagine the team behind this had a lot of fun deciding what nightmares they are going to bring to life and I am intrigued to see where this one goes.

Despite its nerve-shredding concept, the film isn’t going to be relentlessly terrifying (boo!). Director Vincent Masciale has stated that the film is to follow in the footsteps of films like Scream and The Cabin in the Woods, meaning that the comedy is equally as important as the horror. If the film can balance the two perfectly, then I am certain we are in for a treat with Fear, Inc.