Brianne Howey Cast as the new Regan in ‘The Exorcist’?

Brianne Howey from Scream Queens fame, has been cast as a character called Charlotte in the upcoming TV re-telling of The Exorcist. From the sounds of it, she’s going to be playing the new, modern Regan. Her character has been described as a ballerina whose strange behaviour after an accident leads her mother to suspect that she is being influenced by a demon. 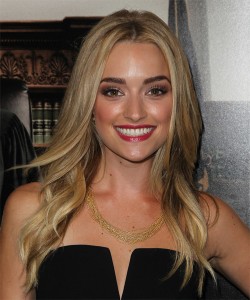 The Exorcist will be a modern re-telling of William Blatty’s novel, so it’s not quite a remake. It’s more of a reinvention. It will be written by Jeremey Slater (The Lazarus Project) who worked on the script for Fantastic Four. He also has his name attached to an intriguing horror film called Pet, which is set for release this year and follows a man who traps his ex-girlfriend below the animal shelter he works in. It sounds like Slater has a happy home with horror; with Fantastic Four being a bit of a dud, we hope The Exorcist will be less disappointing.

The Exorcist has been directed by Rupert Wyatt (Rise of the Planet of the Apes) and is set to air on Fox later this year.