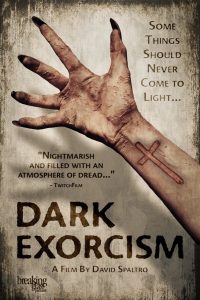 Breaking Glass Pictures are planning to release Dark Exorcism – which was originally called In The Dark – this September 13th on VOD, iTunes and DVD. The film has been written and directed by David Spaltro and follows a student that joins her teacher on a paranormal investigation. They visit Joan Mills and her daughter Bethany, whose home has fallen prey to evil energy and supernatural phenomenon.

You can check out the spooky trailer below which gives you an insight into the dark terrors that are making themselves at home in the Mills’ family home. Dark Exorcism explores the five stages of a haunting; from cold spots and noises to the disappearance of objects and the eventual consciousness of the entity. Scary stuff!

Dark Exorcism will be released on 13th September.