Break the Curse of The Witch’s Doll in February

Annabelle probably won’t be running back to her box anytime soon, but there’s a new haunted doll headed to your screens in February, courtesy of Lawrence Fowler’s Curse of the Witch’s Doll. Check out the trailer below.

The film stars Helen Crevel as a mother who, after fleeing her hometown, begins to suspect that a possessed doll is behind the disappearance of her daughter. 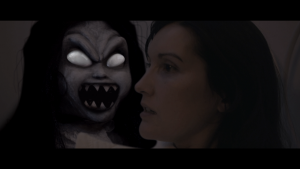 Adeline Gray’s attempt to escape bombing in her home town leads her to a derelict, creepy manor in the woods. When Adeline’s young daughter goes missing during a game of hide-and-seek, a series of inexplicable events lead her to believe a haunted doll holds a vengeful soul; the soul of a murdered Witch. As Adeline’s desperate search for her daughter continues, it soon becomes clear; to have any hope of being reunited, she must defeat the curse of The Witch’s Doll.

Curse of the Witch’s Doll also stars Philip Ridout, Layla Watts and Claire Carreno as The Witch. It lands on VOD on 6th February from High Octane Pictures, with a DVD to follow on 6th March.