Being a professional chef is hard work. Whether it’s keeping up with current food trends or simply making back your expenses at the end of the night, it’s not a business for the weak, so when Chef Brianna decided to set up shop in Monster City, she didn’t actually expect to be full of monsters! Trust me, it’s a lot less corny that it sounds. Brave Chef Brianna takes the world of high pressure cooking and “kick it up a notch” as our protagonist attempts to feed a less than eager crowd of skeletons, fish men, and the odd lizard person. Matched with colourful drawings and a grumpy sidekick, this comic is the classic underdog story that fans of all-ages will appreciate.

Brianna is your average, everyday chef. She bakes cakes, doubts her abilities, and has fifteen brothers, brothers that is she is now forced to compete against for their fathers cooking empire. Having never opened a restaurant, she decided to hit the road and land at the first city that catches her eye, a little place called, Monster City. Literally filled with monsters, she opens up her shop alongside her only employee, a bird woman named Suzan, but soon learns that monsters have food laws that need obeying; forcing her to choose between serving the citizens of Monster City the best she’s got or following a series of dated laws that seriously impact her product. Perhaps this wasn’t as a good idea as she thought.

Brave Chef Brianna is obviously not horror in the true sense of the word. Its pop culture monster fun, like The Munsters or Hotel Transylvania, it’s just kind of wacky. Brianna’s personality is very standard to the underdog ideal. She’s outshined by her brothers, got low confidence but high determination, and will take risks when needed. She doesn’t really stand out in terms of being a main character, but still has enough support behind her that you really want to her to succeed. There’s a good chance that she was specifically designed to be a simpler character by writer Sam Sykes because of the variety of readers of the series, seeing as it is an all-ages (not young) comic. But it’s exactly her single minded drive to open a restaurant that unclogs the comic for other characters, and the overall comic, to shine. It’s a city of monsters! That’s an awesome premise that simply demands to be fully explored. What sort of crazy things go on in monster city?! Who are the monsters that live there and why do they live there? Brianna is perfect for leading the exploration of the 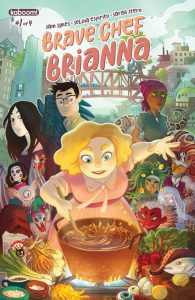 ins and outs of the mysterious city while she does what she does best, serve the yummiest burgers this side of the Mississippi river. Just wait until you see what comes knocking at her door!
The art by Selina Espiritu is simple and bubbly, much like a lot of KaBoom’s all-ages works. If your fan of Bee and Puppy Cat or Stephen Universe art, that this will be right up your alley. Despite the simplicity, each characters is different from each other and Brianna’s blonde hair and blue eyes only further her from her monster counterparts. There are even adorable little details added, like the little radish that makes a run for it when Brianna’s back is turned or how every time some takes a bite of her food, heavenly birds appear. Little things like that really help the push comic along.

With its feel good vibe and spooky monster creatures, Monster City #1 is already getting rave reviews across the board! Pick yours up now!