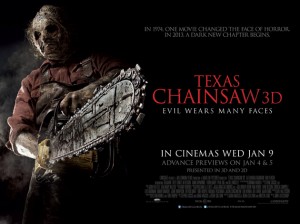 Here’s the brand new UK quad for Lionsgate’s release of TEXAS CHAINSAW 3D, a continuation of the legendary story of the homicidal Sawyer family, picking up where Tobe Hooper’s 1974 horror classic left off. The film is released in UK cinemas January 9th 2013 with advanced previews on the 4th and 5th of January.

In the meantime look out next month in SCREAM #15 for our exclusive interview with Bill Moseley who discusses his TEXAS CHAINSAW 3D role.