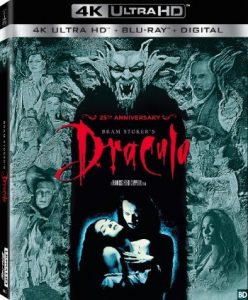 Bram Stoker’s Dracula is, arguably, one of the greatest adaptations of Dracula, so it’s great to see that the film will be receiving an epic 4K Ultra HD release. The special release comes from Sony Pictures Entertainment and will be released to celebrate the film’s 25th anniversary on 3rd October 2017.

As always, the collection will come packed with special features and unseen footage. The full list is as follows:

Synopsis:
From award-winning director Francis Ford Coppola comes the remake of the classic and chilling tale about the devastatingly seductive Transylvanian prince (Gary Oldman) who travels from Eastern Europe to 19th century London in search of human love. After centuries alone in his crumbling castle, Dracula’s taste for humanity has grown bold with desire, drawing him out of seclusion. When the charismatic Dracula meets Mina (Winona Ryder), a young woman who appears as the reincarnation of his lost love, the two embark on a journey of romantic passion and horror. Now fully remastered in 4K, experience this sensual gothic spectacle like never before.

The novel Dracula is an epic and unforgettable read and it is impossible to entirely capture the greatness of the novel on-screen. However, Francis Ford Coppola’s interpretation is near perfect and carries the spirit of Bram Stoker’s novel almost effortlessly. If you’ve not seen it, then now is the perfect time, because it’s going to look even more stunning in striking.

Be sure to add Bram Stoker’s Dracula to your 4K collection on 3rd October 2017.