BOYS IN THE TREES: Film Review 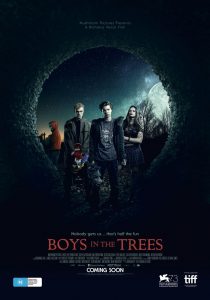 Australian writer/director Nicholas Verso blends a coming of age story with dark fantasy and an homage to 1990s teen horror films in his debut feature Boys in the Trees. Though the film is never scary enough to be considered an outright horror movie and though the dialogue is sometimes a bit heavy handed, the film is gorgeous to look at and is filled with spooky overtones from different cultures.

In October 1997, Corey (Toby Wallace) is in his final year of high school and has plans to go to university in New York to study photography. This doesn’t sit well with his bully friend and classmate Jango (Justin Holborow), leader of a group of ne’er-do-wells who are content with staying in their town and partying their lives away. Romany (Mitzi Ruhlmann) is a female classmate who also dreams of escaping, in her case to Canada, who sees something special in Corey, much to the irritation of Jango.

On Halloween night, Jango harasses classmate Jonah (Gulliver McGrath), a constant target of his. After a disagreement between Corey and Jango, Corey leaves the group and finds Jonah skateboarding alone. The bullied victim talks Corey into seeing him home but challenges him to play a game that they invented as childhood friends, which involves dares along with tales of people with ruined lives, and ghosts. Corey plays along reluctantly and the night builds into one of tension, during which Corey finds himself reassessing his entire life.

The former friends’ homeward journey is neither a short nor uneventful one, and Verso finds plenty of places to present set pieces of the eerie and fantastic. For example, a storm drain brings on the creeps, and an empty school at night becomes rife with the threat of violence. One offbeat highlight is a multicultural Day of the Dead ceremony. 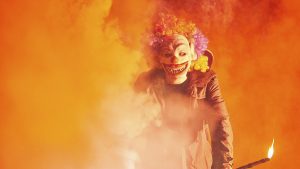 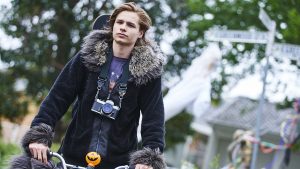 Ultimately, though, Verso’s focus is not on petrifying viewers. Rather, he focuses on the events that fractured the friendship between Corey and Jonah, and the decisions that Corey must face as he enters young adulthood. The pacing is sometimes uneven, but overall Verso holds things together and brings the proceedings to a satisfying conclusion.

The actors all turn in fine performances. Wallace gives Corey the proper balance of outwardly disaffected but inwardly confused. McGrath brings a wiseness to Jonah, making his character a solid foil to Corey. Holborow plays the dangerous alpha male with zeal. Ruhlmann is especially strong as a potential love interest for Corey who is also fiercely independent.

Where the actors sometimes have trouble, though wholeheartedly committed to their roles, is when Verso’s dialogue becomes purple or heavy handed. They often speak like poets and philosophy graduate students rather than average high school students, especially Jonah; even the bullying Jango has his share of figurative remarks. Visual symbolism isn’t difficult to follow here, either.

Verso has crafted a beautiful film in Boys in the Trees, with splendid, imaginative aesthetics. He is ably assisted by cinematographer Marden Dean, production designer Robert Webb, and visual effects chief William Gammon. Superb colour palettes share time with moody, other-worldy, shadowy sequences. Verso knows how to put together a soundtrack, too. Period-appropriate acts such as Bush, Garbage, and Rammstein are among those evoking aural memories of the late 1990s.

Although the self-conscious dialogue might ring unauthentic, one positive thing about that is that Verso is addressing his target audience of teenagers respectfully, rather than talking down to them. He presents some life lessons worth learning to them, and does so by creating a cinematic world that, though containing elements that are familiar to a more experienced horror audience, is colourful and captivating. 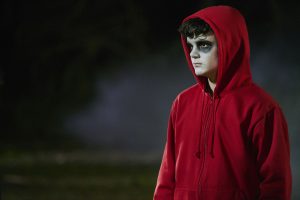 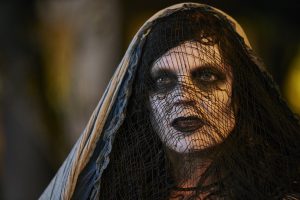