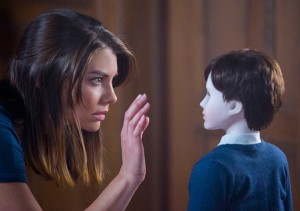 When all American twenty something Greta Evans (Lauren Cohan) answers an advertisement by eccentric British couple Mr and Mrs Heelshire (Jim Norton and Diana Hardcastle), to look after their son Brahms whilst they go on holiday, it sounds like money for nothing.  However when Greta arrives at the secluded Heelshire mansion, deep in the English countryside, she soon realise that everything is not as it initially seemed.  Many years before Brahms died in a horrible house fire and, unable to cope with the grief of losing their son, the Heelshire’s substituted him with a disturbingly life-like doll.  A doll which, over the years, has taken on a life of its own.  Now, with the Heelshire’s away, and Greta alone with ‘Brahms’, she begins to realise, to her peril, that the Heelshire’s son does not have to be physically alive to be very dangerous indeed.

On the face of it director William Brent Bell’s new chiller The Boy, is so full of old school horror clichés, that it shouldn’t really work.  However the film, surprisingly, manages to overcome any such ‘seen-it-all before’ prejudices you may harbour, by making no attempt to hide them, but instead embrace and use them fully to its advantage.

How many times have we seen the premise of a creepy doll with an apparent life of its own, who brings havoc and carnage to an array of hapless victims unfortunate enough to cross its path?  How often is the young protagonist of the film – frequently female as, seemingly in the mind of many filmmakers, females are more vulnerable when the terror sets in – stranded alone in a big house in the woods, with no immediate help from the outside world?  And of course the victim’s fears and concerns about the diabolical events which are unfolding, are nearly always dismissed as paranoia on their part until its almost too late. 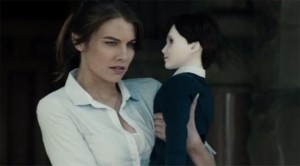 The Boy alludes to so many of these past horrors that it frequently seems in danger of becoming a visual tribute to past glories.  The ‘devil’ doll references have already been mentioned.  But here we also have the premise of a lonely, old house not being all it seems with touches of The Cat and the Canary in all its many forms, the criminally underrated Oliver Reed frightener Burnt Offerings (1976) and Wes Craven’s disturbing The People Under the Stairs (1991).  Then of course there is the ‘nanny’ theme as witnessed to terrifying effect in The Innocents (1961).

Where other filmmakers may have faltered however, by making these references so blatant as to be laughable, here Brent Bell, and writer Stacey Menar – in her first big screen treatment – blend the associations from the past with enough style and subtlety to make them appear fresh and intriguing.  This time round the doll – in the form of a replica of Brahms, the son of the mansion’s owners – makes no attempt to be anything other than what it is, an unnervingly lifelike, full-size, china faced mannequin.  Despite this he – or it – manages to produce some genuinely unnerving encounters, resulting from the fact that the truth behind him, remains tantalisingly unexplained until the full-on finale.  And of course there is the house where all the mayhem plays out.  The film’s one ‘oddity’ lies in the home of the eccentric Mr and Mrs Heelshire and their equally weird offspring.  The story is apparently set in England, and everything from the cast members – with the exception of American Greta, and her violent ex-boyfriend Cole (played by Ben Robson) – to the countryside surrounding the Heelshire’s home, is characteristically British in feel and appearance.  However the house itself is not.  Marvellously gothic in atmosphere – complete with wood panelled hallways, family portraits, a musty old attic and rambling gardens which wouldn’t look out of place surrounding some stately English pile – the outward appearance of the house is disappointingly more Gothic American than Elizabethan English.  It’s unsurprising then to find that the action was filmed at the historic Craigdarroch Castle in Canada’s British Columbia – distinctly British in atmosphere, but infinitely easier and cheaper for American filmmakers to film in. 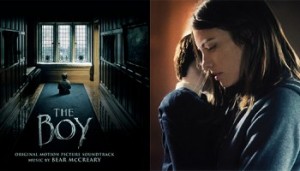 One of the biggest challenges one feels, which faced the filmmakers, was to make Greta’s ‘nanny’ appear more than just a twenty-something babysitter-in-peril character, or a staid, and matronly, older woman.  Fortunately though they envisaged a young woman with enough of a troubled backstory to introduce some meat to the story – and an interesting twist towards the end – who falls neatly somewhere between helpless and feisty independent female.  Though all the main players – Norton and Hardcastle as the oddball Heelshire’s and James Russell as James, the local grocery store owner / knight on white charger, who is on hand to help Greta just when she needs it – approach their roles with gusto and believability, it is Cohan as the threatened Greta who holds the screen, alongside her china faced nemesis.  Cohan – also to be seen briefly in the other big release of the moment Batman v Superman: Dawn of Justice – combines just the right degree of gutsy resourcefulness with anxious vulnerability to create a woman who’s reactions to her predicaments are both authentic and realistic.

For a film with next-to-no gore (sorry to disappoint those looking for a visceral fix) and very little, full-on violence, The Boy none-the-less manages to induce a lasting sense of dread and unease through suggestion and inference, and is all the better for that.